St. Julian’s Mayor Albert Buttigieg expressed serious concern regarding the application to build a ferry pontoon on the Balluta, St Julian’s seashore. He stated that the manner in which the application is being treated is giving rise to suspicions of “behind-the-scenes negotiations by the wealthy and powerful developers”.

Buttigieg stated that the application clearly violates planning policy, and yet it is not being refused immediately. Furthermore, he explained how the St Julian’s Local Council has been struggling against developers even taking over parking spaces and pavements. Some have already started applying for permits for ticketing booths blocking the promenade, to service the ferry.

Andre Callus, an activist with Moviment Graffitti, also questioned the fact that the application was initially recommended for approval by the PA Case Officer, and only later recommended for refusal by the PA. He said that this was a decision which has suspiciously been delayed.

He added that the ferry would not provide an alternative mode of transport and relieve traffic problems, since it is a private ferry. He explained that it would be the equivalent of commuters using a hop-on hop-off bus for their daily commute.

Astrid Vella, speaking for Flimkien għal Ambjent Aħjar (FAA), explained that Balluta is a popular swimming zone, and is even included in Transport Malta’s list of swimming zones. She outlined that in a country with a major obesity problem, an area which is so popular with sailors, kayakers and canoeists will be out of bounds once a ferry comes along.

The Planning Commission was meant to take its final decision regarding the jetty in Balluta Bay on the 11th of February. 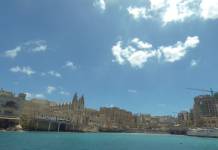 The San Ġiljan ASC Waterpolo club aligned with the developers, condemning the stand taken by NGOs and St Julian’s Local Council against the application for the jetty. it said that the project will bring much-needed funding towards the club.