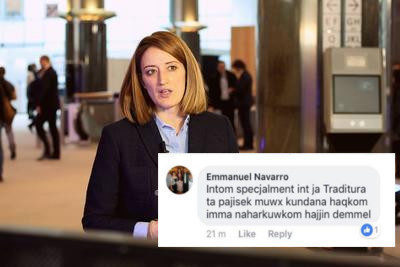 The man who said that Nationalist Member of European Parliament Roberta Metsola should be burned alive was sentenced to six months’ imprisonment, suspended for one year.

Today, the Court found 66-year-old Emmanuel Navarro guilty of the charges brought against him.

In November, Navarro wrote a Facebook post in which he said that every Nationalist Member of the European Parliament, especially Roberta Metsola should be burned alive.

Shortly after the police began their investigation. When he appeared in Court for the first time, he was not granted bail. However, he was eventually released.