It is essential to support employers if one is to support their workers, Minister Carmelo Abela said on Saturday morning.

It was Abela’s turn to give a press conference on the economic measures the government announced last Monday to kickstart Malta’s economic recovery in the wake of the Covid-19 pandemic. Perhaps in response to criticism that the measures appeared to prioritise businesses over people, he emphasised that the two were interlinked. 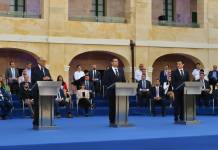 “The measures we have announced – both those addressing enterprises and the investment in industrial spaces and employees’ skills development – directly benefit employees as they create new opportunities for them,” the minister said. “This also holds true for the assistance which the government has provided to companies and which will help in their liquidity. These will also impact employees directly and will continue to safeguard their jobs as well as their income.”

He stressed that the measures followed strong social dialogue, within and outside the MCESD, and insisted that improving work conditions was a “basic principle” for the government.