Out of 1,041 swab tests carried out in the last 24 hours, eight have turned out to be positive for coronavirus, Superintendent of Public Health Professor Charmaine Gauci announced on Sunday during the daily press briefing.

Since 7 March a total of 378 cases have been recorded; 44 have recovered while three have lost their lives.

Earlier on Sunday morning, Deputy Prime Minister and Health Minister Chris Fearne announced that another 28 individuals have recovered from coronavirus bringing the total up to 44 since the first case was registered in Malta. The virus has claimed the life of three individuals. The first death related to coronavirus was registered on 8 April.

13:00 Thank you for following this live blog!
Monique Agius
12:58 Professor Gauci is closing off the press conference. She underlines that today is another working day. She urges the public to remain home and to cooperate fully with the health authorities in order to contain the spread of the virus.

Professor Gauci reminds everyone to refrain from inviting anyone home.

She wishes everyone a 'Happy Easter!'
Monique Agius
12:56 Another question concerned the number of doctors and nurses who are currently in quarantine. Professor Gauci says that this information will be divulged at a later stage. She adds that for health care workers have numbers were they can call to get a test.
Monique Agius
12:55 The question concerns one's last moments at hospital and whether visitors can be allowed in. The journalist also asked about funerals.

Professor Gauci said that only the burying rites are being carried out. She added that only a limited number of people can be present.
Monique Agius
12:53 Another question is about a particular Nursing Officer at Saint Vincent de Paule who is not allowing carers to use their own masks.

She reiterates that the individuals saved in the latest search and rescue operation all had tested negative for coronavirus.
Monique Agius
12:46 Question time.

The first questions relates to Hal Far Tent Village and whether the health authorities have carried out random testing at China House and Peace Lab which are in the vicinity.

Professor Gauci says that the swabs are being carried out by their team and the Red Cross.

'We have a plan to start random testing on the community,' she says.
Monique Agius
12:46 Question time.

The first questions relates to Hal Far Tent Village and whether the health authorities have carried out random testing at China House and Peace Lab which are in the vicinity.

Professor Gauci says that the swabs are being carried out by their team and the Red Cross.

As part of the containment strategy is to identify and isolate cases.
Monique Agius
12:39 Case details:

Man, 61, who was repatriated to Malta on 6 April. He had developed symptoms when he was still in the UK. His wife was also swabbed but it resulted negative.

Woman, 58, developed symptoms associated with coronavirus. She works with a family.

Man, 73, who developed symptoms on 5 April. He had no contact.

A total of 1041 swab tests were taken over the past 24 hours with eight resulting positive, she says.

More information can be found on their Facebook page.
Monique Agius
12:25 Here's a recap from yesterday's briefing:

– A Syrian child aged 8 was one of the new cases

– The total number of cases stands at 350 total cases 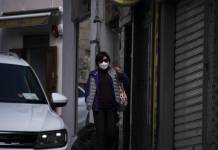