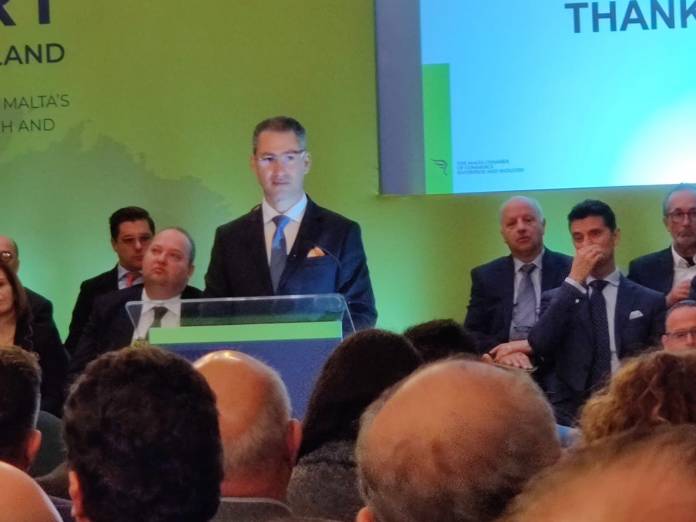 The Malta Chamber (MC) has advised the government to adopt a two-pronged strategy to address the challenges which Malta will face in the next five years. In formulating an economic vision for the next five years, the MC drew together an impressive think tank of the top 25 CEOs and business influencers in Malta. This time around, the MC’s proposed vision is based on a five-year stretch, two years shorter than the previous proposals: “It is the Chamber’s judgement that the fast-moving global, regional, and local challenges – coupled with the rapidly changing landscape of disruptive technologies and innovation – place constraints on the time required to make important decisions. These are decisions that lay foundations or build on existing policies that will determine Malta’s future economic growth and social well-being”.

The MC’s vision for the next five years is based on addressing the economy in a pincer movement: achieving smart economic growth and securing sustainable economic development. This two-pronged approach will be based on the strength of seven pillars: Quality, Innovation and Technology, Global reach, Human Capital, Productivity. Governance and Social Cohesion.

In the MC’s vision, there are four determinants which will enable the achievement of smart and sustainable economic growth. These are long-term macroeconomic stability, digitalisation and governance, government and the judiciary and infrastructure bottlenecks. The sixty recommendations here are wide-ranging. They include the need to address with some urgency the issue of pensions, health-care and long-term care as well as the implementation of 5G technology. The MC recommends zero-tolerance policy to corruption and the creation of a fair, swift, accountable and transparent judiciary. The document proposes a refocussing of transport policies making them person-centred not car-centred and the adoption of a more innovation-led approach to industry.

In listing the hindrances to economic growth, the MC’s document warns of the unrelenting urban sprawl. “Malta must curtail the unrelenting expansion of the construction sector – irrespective of its negative impacts on the environment and quality of life; a housing and rental market that is spiralling wage inflation and in turn eroding competition and contributing to a serious deterioration in the quality of life of a large cohort of people” commented the MC. The document also complains of an educational system that continues to result in poor outcomes in practically all the educational performance indicators.

The one place where construction is necessary…

…is in the sphere of credibility. The MC document stressed the need for “Malta … to completely rebuild its credibility as an honest global player across all economic sectors. The Island suffered huge damage to its international reputation as a result of the mishandling of the Panama Papers scandal which went unchecked for years in spite of repeated calls, even by the Chamber, to take bold decisions eventually reached unprecedented heights with the outcome of investigations of the murder of Daphne Caruana Galizia. The clean-up process expected by the Chamber and the ensuing institutional reforms must be made in the shortest time possible. The country cannot expect to experience similar rates of economic expansion and long-term economic stability without good governance and at the same time business cannot thrive without economic and political stability. The Chamber, as it has consistently done since the Panama Papers revelations, continues to insist on the unequivocal upholding of the three main pillars of good governance, namely Accountability, Transparency and the Rule of Law”.