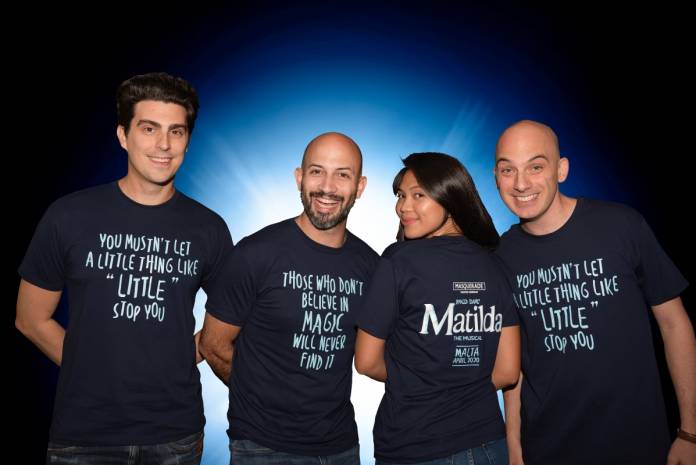 The internationally acclaimed Matilda The Musical is soon to be staged in Malta, featuring a cast of big-name local performers and international musical theatre stars.

Adapted from the incomparable children’s novel of the same name by Roald Dahl, Matilda The Musical tells the timeless story of an extraordinary little girl who, armed with a vivid imagination and a sharp mind, dares to change her own destiny. With original songs by Tim Minchin and a script by Dennis Kelly, the show has had numerous sell-out tours around the world since it premiered in 2010 and has won more than 90 international awards including 23 for Best Musical.

For its official Malta debut, Masquerade Malta will produce Matilda The Musical at the Mediterranean Conference Centre in Valletta for a limited run of shows this April, with a cast that makes the most of the blossoming musical theatre talent found in Malta.

“Masquerade is proud to have secured the professional rights to officially produce Matilda The Musical for the first time this April, and even more so that the cast will feature some of the very best musical theatre talent home-grown here in Malta,” says Masquerade’s artistic director Anthony Bezzina, “This funny and touching production is loved by audiences and critics alike all around the world, and we can’t wait to share it now with local audiences, with a brilliant cast that can rival any other internationally with its exceptional talent, energy and fun.”

Matilda The Musical will be brought to life in Malta by a stellar cast of household names including Thomas Camilleri as Miss Trunchbull, Katherine Brown as Mrs Phelps, Christopher Dingli as Mr Wormwood, Nadine Bico as Miss Honey, Sean Borg as the doctor/escapologist, Joshua Tackas as Sergei and Francesco Nicodeme as Rudolpho. Joining them as Mrs Wormwood will be London-based actress, singer and dancer Anna Middlemass, whose musical theatre credits include Bad Girls, Wonderful Town, Bare, and Spring Awakening.

The creative team behind Masquerade’s production also bring a wealth of theatrical experience, with Anthony Bezzina as director, Kris Spiteri as musical director and UK-based Ewan Jones as choreographer.

Tickets are available online at www.mcc.com.mt. For more information visit www.masquerademalta.com or call 7979 3737.

Matilda The Musical postponed due to Coronavirus situation