Reports are coming in about an mass stabbing attack in Hamburg-Wilhelmsburg, Germany. At 11.58am local time, the emergency services were called to the Luna Centre after three people were injured in a stabbing.

The attacker, identified as a confused looking woman, managed to stab two customers in a shop called Kik but they did not sustain major injuries. While a third person, an employee, was reportedly stabbed and suffered bruises.

Police caught the attacker in nearby Jungnickelstrasse and taken to the police station in Wilhelmsburg.

The cause of the attack is not yet know.

The attack is the second terror attack in Germany this month. On 1st December, in the city of Tier, a car drove at high speed into pedestrians. A child is among at least 4 people killed. 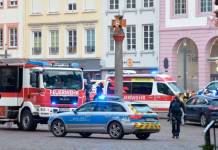