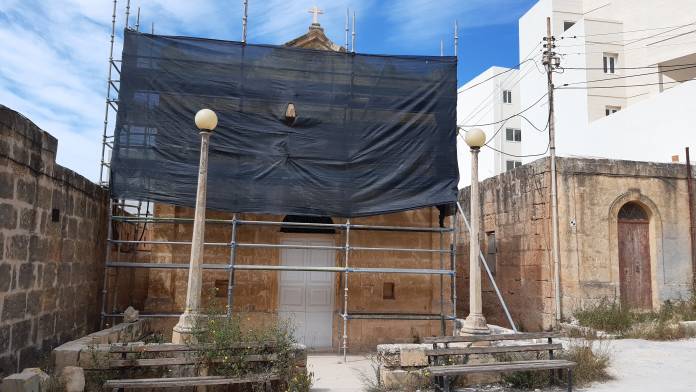 It was the 8th May 1919 (101 years ago), when brothers Ġamri and Salvu Camilleri from Manikata gave a piece of land to Salvu Galea and Lazzru Grima on behalf of the local farming community to build a church, sacristy and a small house for the priest.

Manikata Parish priest Fr Denis Schembri explained to Newsbook.com.mt that the land was granted on the condition that the church be built within five years of the contract. The builder of the church was Spiru Grima from Manikata, nicknamed Tal-Qablu. The contract was drawn up under notary Luigi Gauci Forno at his Mellieħa holiday home.

It seems the church did not take long to build. In 1920 the bell tower was manufactured at the Debono brothers’ foundry. On it is a bas-relief of the ‘Heart of Jesus’ (Qalb ta’ Ġesù).

“This painting was donated by Vincenzo Vella who lived in the Ballut district,” said Fr Denis, “Calì seems to have been satisfied when he saw his painting on the spot, because on one of his visits to the chapel he left his signature on the façade of the church overlooking the alley.”

Fr Denis explained that it is not known who the architect of the church was… if there ever was one.

“The fact that the contract for the lease of the church mentions only the builder, gives the impression that the builder came up with the plans himself without consulting an architect. This may be the reason for the poor structural condition of the chapel today. It appears that the builder had little technical knowledge on how to build a roofed building. In fact, the walls are not thick enough to carry the weight of the roof,” he said.

The chapel continued to be frequented by Manikata residents until 1975 when a new church, designed by architect Richard England, was built. In 1975, by decree of Mons. Archbishop Mikiel Gonzi, the church became a Parish.

On the initiative of Manikata Parish, together with the Mellieha Local Council, a request was made to the Restoration Directorate within the Ministry of Justice to carry out the restoration of the chapel. This request was granted. Work started in September 2019 and should be completed by August of this year.

The current restoration work consists of restoring the stone of the chapel, as well as strengthening its walls. After this stage, painting works will begin and a new lighting system will be installed, Fr Denis told Newsbook.com.mt.

Watch: “They should teach how to fill out a tax form...