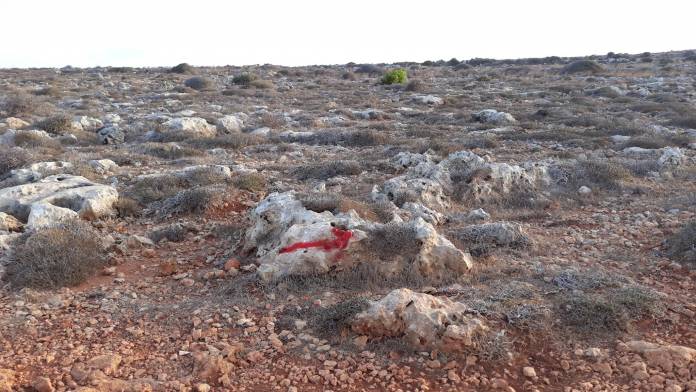 A French organisation is responsible for the multiple spray-painted arrows appearing at the Majjistral Park and other areas, said the Environment & Resources Authority (ERA) following an investigation with the Police Force.

In a statement, ERA said that the offenders have been identified and this morning ERA enforcement officers and the Police made the responsible party prove that the markings and signs made, which were sprayed as directional aids for a series of races, were removable by water.

The event organiser, which is a French organisation, has been instructed to remove all its signs by Friday night.

The complete removal of these signs will be assured by the Environment & Resources Authority (ERA) together with the Police Force and with the Majjistral Park rangers in relation to signs within that Park.

Further action will be considered if the signs are not removed within the stipulated timeframes, said ERA and to avoid future instances the organisers have been informed on the proper practice to be followed when organising such events.

The Environment & Resources Authority said that organised activities within protected areas under the Environment Protection Act (Cap. 549) may require a prior permit from the Authority and organisers are encouraged to consult with ERA to determine whether a permit for their activity is required.

Event organiser to be prosecuted over spray-painted arrows across countryside