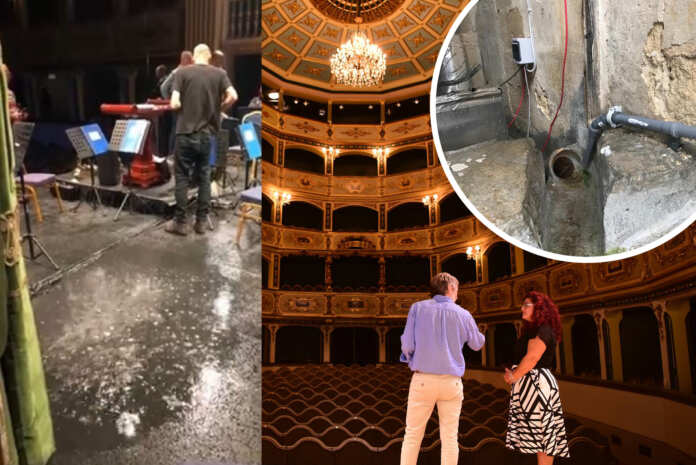 On Saturday, Manoel Theatre employees ended up mopping away rain that leaked through the roof of the national theatre. Michael Grech the Chairman of the Board confirmed this with Newsbook.com.mt and also added that the leak was due to an overflow in the drainage system on the roof that could not cope with the volumes of water that have accumulated after the rainstorm in the morning.

Rehearsals for a concert for the evening had to be suspended as the musicians evacuated the stage. Footage of the musicians leaving the stage was uploaded on Facebook but removed within the hour.

From the pictures that Micheal Grech so kindly sent to Newsbook.com.mt it is clear that the drain is next to the new air conditioning system that had been installed in the recent months with an investment of €1.8 million from EU funds.

Newsbook.com.mt also tried to take a comment from the Chief Executive Elizabeth Ebejer however her mobile was answered by Michael Grech as in his words the former was not available for comment. Grech stressed the fact that there were no damages as “not even the main curtain got wet.”

Grech also confirmed that he and Ebejer were at the Theatre to make sure that of no damage.