Dr Anglu Farrugia, Speaker of the House of Representatives expressed tho opinion that steps should be taken against ‘those persons who exceeded the limit and manifestly broke the law, including the use of violence causing damages to a representative of the people’. Eyewitness accounts told Newsbook.com.mt that the ministerial car drove into the protesters as the minister attempted to leave parliament. People, including a policewoman, were injured by the car, according to the eyewitness reports. Newsbook.com.mt requested a reaction from the minister and the police a few minutes after the incidents took place.

In a succinct statement, Mr Speaker said that the incidents were far from peaceful adding that ‘Members of Parliament were obstructed and insulted while leaving parliament’. He added that the actions were irresponsible and could even be construed to constitute a breach in the Ordinance which regulates the privileges and powers of the House of Representatives (Cap113).

No amount of public rage will stop our work – Owen Bonnici 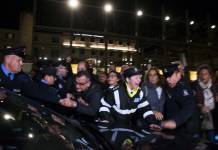 Wednesday evening, incidents broke out outside parliament Wednesday evening when the Repubblika organised protest clashed with a ministerial car. It was thanks to the work of former Opposition leader and PN leader Simon Busuttil that the ministerial car finally drove through the crowd. Anti-corruption activists left Castille Square to place flowers at the Great Siege monument where the protest memorial was set up for slain journalist Daphne Caruana Galizia.

Watch: Minister’s car and activists in incidents outside parliament 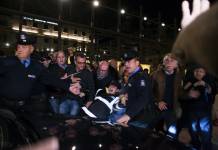 Afterwards they gathered in front of Parliament demanding resignations. Justice Minister Owen Bonnici who was still in the parliamentary building was making his way out but found the going rather difficult. Activists surrounded his car, as his driver tried to drive through the crowd. Bonnici’s driver drove over the foot of a police woman who was standing in front of the Minister’s car.

Opposition MP Karol Aquilina intervened to stop him from driving, as another woman was on the ground. The driver continued to drive until he eventually stopped.

Minister for Justice Owen Bonnici said that no amount of public rage will “dampen the great will which drives us to work, every moment, towards a better country”. Bonnici chose to react on Facebook to the incidents which took place Wednesday evening outside parliament.