The Socialists Workers Party led by Prime Minister Pedro Sánchez has won Spain’s election, but is still short of a majority. This is the third election in the past four years where the Socialists have proved to be most popular.

During a rally in Madrid late Sunday night, Sànchez said “The Socialists have won. And with that, the future has won, and the past has lost.”

With 99.98% of the votes counted the Socialists have gained 29%of the total votes, and 123 seats in parliament. They will now be starting what many analysts are forecasting as long weeks and possibly months of negotiations to form the majority that will govern the Iberian state. It is highly probable that they will seek the help of the left-wing Podemos and separatist Catalan and Basque parties, or the centre right. 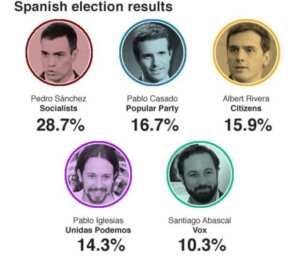