Spain awoke to the prospect of more lockdown on Thursday after parliament approved an extension to its state of emergency in the early hours of the morning following a mammoth session of debate.

Parliament eventually voted to extend emergency measures – including the state of lockdown that has seen people confined to their homes except for essential trips for food, medicine and work – for a further 15 days until April 12.

A majority of 321 lawmakers voted in favour of the extension, while 28 abstained. The largest opposition party, the People’s Party, supported the measure.

“It is not easy to extend the state of emergency,” Prime Minister Pedro Sanchez said in Parliament. “I am convinced the only efficient option against the virus is social isolation.”

Spain is struggling to cope with the mounting coronavirus crisis as its death toll exceeded China’s on Wednesday with another 738 lives lost in a single day. 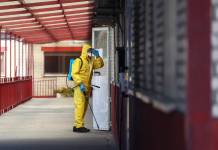 The number of coronavirus cases in Spain has jumped ten-fold since the state of emergency was imposed on March 14, and the number of fatalities by 30 to 3,434.

Spain now has the second-highest number of deaths globally after Italy’s 6,820.

Nursing homes across the country have been overwhelmed, and a skating rink in Madrid has been turned into a makeshift morgue where hearses park outside the building, which is normally a popular venue for children’s birthday parties.

The country’s government is scrambling to get hold of protective equipment like masks, scrubs and gloves, and ventilators.

The country has also turned to NATO partners for protective gears and ventilators to treat patients.