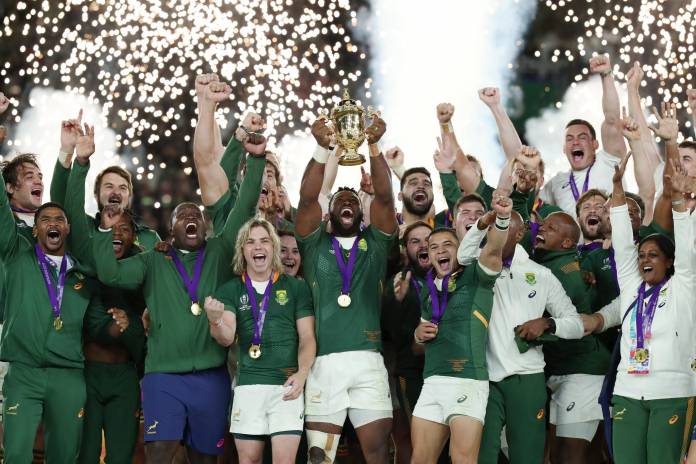 South Africa have defeated England 32-12 to win the 2019 Rugby World Cup at the Yokohama International Stadium in Japan.

Tries by wingers Makazole Mapimpi and Cheslin Kolbe and the goalkicking of Handre Pollard earned South Africa their third Rugby World Cup title on Saturday as the fly-half kicked 22 points to secure a 32-12 victory over England.

South Africa, playing with far more ambition than in their semi-final win over Wales, kept up the pressure in the second half as England struggled to build momentum and Pollard nudged them 18-12 ahead after an hour.

The Springboks then scored their first try in three World Cup finals when Mapimpi broke clear in the 66th minute, chipped ahead and collected the ball back from Lukhanyo Am, and recalled winger Kolbe then blasted through to put the gloss on a deserved win.

This is the third time that the Springboks have won the trophy.

South Africa’s President Cyril Ramaphosa, who was in Japan for the final, tweeted: “We are the champions.”

La Liga and the Serie A are back, no big upsets in the FA Cup

In race to digitise, skills gap a drag on South Africa’s big banks

John Paul Cordina   August 6, 2020
The relaxation of Covid-19 measures across Europe saw retail trade increase by 5.2% in the EU last June, when compared to the previous month.

John Paul Cordina   August 6, 2020
The Archdiocese of Malta has registered a surplus of €3.5 million in 2019, which has helped make up for the negative impact of the Covid-19 pandemic.