A woman who was on her way to Istanbul was found to be carrying €11,380 in undeclared cash after she was stopped by Customs officials at the Malta International Airport.

The woman told the Customs Officials that she was carrying exactly €10,000.

She was then escorted to the Customs Office. During a search, the officers found €11,380.

The Customs Anti-Money Laundering Team along side with the assistance of the Canine Team intercepted a total amount of €77,750 in undeclared cash in six separate cases during October.

As per national legislation, the passenger agreed to sign an out of court settlement agreement and was fined accordingly.

Two days ago:
Dog sniffs out over €23,000 in undeclared cash 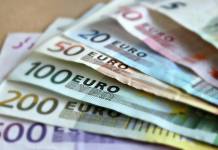