The Ministry for Social Solidarity has received 8,504 requests for benefits under four different schemes managed by the ministry.

In a press conference on Thursday addressed by Social Solidarity Minister Michael Falzon and Permanent Secretary Mark Musu, the government gave an account of the activities of the ministry over the past week.

The ministry manages four benefit schemes aimed at assisting individuals who do not qualify for the wage supplement. The schemes are benefit for parents that have to stay home and take care of their children and are not offered the possibility to work from home (COPB), benefit for individuals with disability who have to stay home because they are deemed vulnerable or they are not able to telework (CODB), additional benefits for those who lost their job than the normal unemployment benefit (COUB) and medical benefits (COMB).

The beneficiaries will receive €800 a month in case of full-time employees and €500 a month in case of part-time employees. Social security contributions will be paid from the benefits, however the recipients will continue to receive other benefits such as the children allowance and in-work benefits, among others, which are subject to adjustment according to the revised income.

Permanent Secretary Mark Musu explained that until 15 April, the Ministry had received 7,214 applications out of which 78.1% were processed. The total expenditure during that week reached €2.6 million.

Speaking about the latest figures, Musu said that a total of 8,504 applications were received until 22 April and 91% were processed.

Musu remarked that over a week more than 5,000 requests were received under one of the four schemes, referring to the benefit available for parents. He also noted that the net government expenditure shot up by €1.5 million in just seven days.

Musu also announced that 103 individuals who were beneficiaries under one of the schemes have either reached an agreement with their employer to work from home or have qualified under the Malta Enterprise scheme.

Since the outbreak of the coronavirus in Malta, various measures have been take to stop the spread of the virus within the community. This has also led to government offices being shut down and services have moved online. Musu explained that the Ministry received a total of 34,263 emails on SocialSecurity.gov out of which 3,005 remain pending.

The government will be looking into allegations of possible shortcomings at Downtown Hotel in Gozo which was recently granted a temporary licence to operate as an elderly care home.

Residents at Dar Sant’Anna at the Gozo General Hospital have been transferred to Downtown Hotel.

On Thursday, Times of Malta reported that families were horrified at the conditions in which the residents were living in.

The Ministry for Gozo is paying Downtown Ltd €54.79 for every bed space. Social Solidarity Minister Michael Falzon explained that Downtown Hotel had applied for a temporary permit. During the press conference he was asked about the allegations concerning the conditions at the new temporary space.

According to relatives of two elderly patients who died at the hotel after being moved there, the conditions at the hotel were “claustrophobic”.

Falzon said that the authorities will investigate the allegations and any shortcomings. He underlined that while the transfer was temporary due to the coronavirus outbreak and the need to free beds at the Gozo General Hospital, the government will not accept a situation were the services offered are substandard.

On Wednesday, Superintendent of Public Health Professor Charmaine Gauci announced that during the overnight tests only 1 case was detected. Further, more individuals have successfully recovered bring the number up to 165. 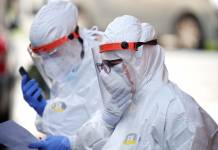