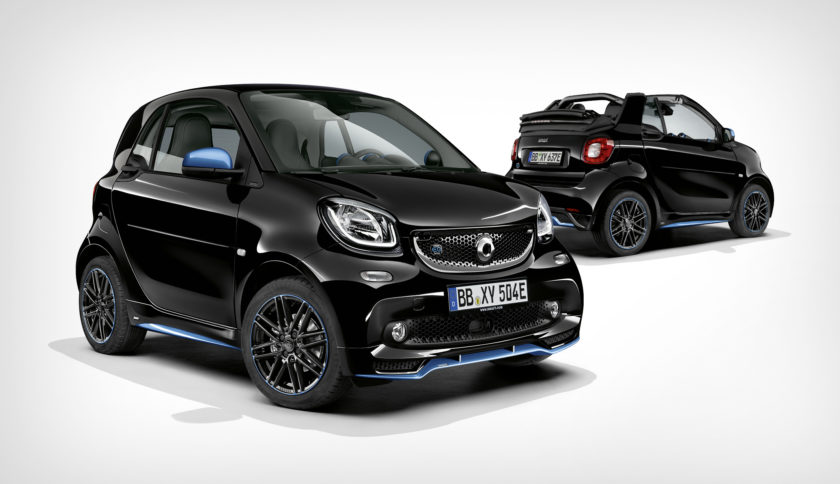 Twenty years ago, one of the most unusual production vehicles ever was launched onto the market. It was recognisably different to conventional cars – the smart city coupé, which today goes by the name of the smart fortwo and has been on the market in its third generation since 2014. Measuring barely over two and a half metres in length, the compact two-seater fitted crossways into parking spaces and established a whole new class of its own. Back in 1997 at the Frankfurt International Motor Show, smart demonstrated its own unique answers to issues of urban individual mobility which today are more acute than ever. Production began in July 1998, and 20 years on it is apparent that the idea has caught on in a big way, with over 2.2 million smarts sold to date. Thanks to its technical innovations and a design combining functionality with joie de vivre, the smart has become a cult car. And smart remains true to its pioneering role: smart is the first car brand with its sights set on a clean-cut switchover from combustion engines to electric drive.

“Ever since it was established, smart has been a pioneer of the automobile industry – on all fronts: from the revolutionary vehicle concept through the trailblazing plant architecture in Hambach to the latest development – the brand’s focus on all-electric drive systems,” notes long-standing smart boss Dr Annette Winkler. “20 years of smart – first and foremost, this is the success story of our team and dealers, who have put their expertise, creativity and dedication into improving the quality of life in the city.”

Following the smart fortwo’s initial launch in Germany and eight other European countries, it is now available in 46 countries across the globe.

The current, third generation was launched in 2014. The smart fortwo has undergone improvements in virtually all areas and is markedly more comfortable. The signature smart rear-mounted engine is now also available for the first time in the four-seater smart. The smart fortwo and smart forfour are clearly recognisable as members of the same family. Many design features such as the headlamps, the cooling air grille in the front and the iconic tridion safety cell are identical, for example.

Short overhangs, a minimal length and a high steering angle are optimal prerequisites for ensuring that the smart models get around every corner and into every parking space. When it comes to the turning circle, the smart fortwo sets a new benchmark: at 6.95 m (from kerb to kerb) and 7.30 m (from wall to wall) it makes turning manoeuvres extremely simple. And the smart forfour turns almost as compactly as the previous fortwo generation (wall to wall: 8.75 m). Its statistics are 8.65 m (kerb to kerb) and 8.95 m (wall to wall).

The models also come up trumps with regard to maximum space packed into minimal dimensions, as documented by the excellent body space index. This describes the ratio of interior to exterior length, whereby the interior length is measured from the accelerator pedal in unused position along a horizontal line to the rear end, as a simple means of comparison between different vehicles. Both models attain top ratings for this criterion: 75% (smart fortwo) and 77% (smart forfour).

The smart fortwo cabrio followed in 2016. Its “tritop” folding soft top enables unique flexibility: at the touch of a button the smart fortwo cabrio is transformed from a closed two-seater into a car with a large sliding canvas sunroof, or a fully-fledged cabriolet with the soft top completely open. This enables the fresh air driving experience to be adapted to the weather or the driver’s mood.

Since 2017, all three body variants have additionally been available as electric-powered models (power consumption, combined: 14.0-13.5 kWh/100 km; combined CO2 emissions: 0 g/km1). This makes smart the only car manufacturer in the world to offer its model range both with combustion engines and as all-electric versions (see overleaf for details).

At the 2017 Frankfurt International Motor Show smart presented the smart vision EQ fortwo – an electric and autonomous vision for highly efficient and flexible local public transport. The study presents a consistent concept for urban mobility and car sharing of the future. The vehicle picks up its passengers directly from their chosen location and has no steering wheel or pedals. It is the first concept vehicle to embody all four pillars of the CASE strategy: “Connected”, “Autonomous”, “Shared” and “Electric”.

smart is the first car brand with its sights set on a clean-cut switchover from combustion engines to electric drive: smart has been selling only electric vehicles in the USA, Canada and Norway since 2017, and from 2020 it will be marketing only electric battery-powered vehicles in Germany and Western Europe, too. The rest of the world is to follow soon afterwards.

With 160 Newton metres of torque immediately available, the 60 kW electric car boasts exceedingly agile acceleration. One battery charge provides sufficient range for running around the city. smart EQ fortwo and smart EQ forfour can be charged at a domestic power socket – and the powerful on-board charger which comes as standard makes charging up to twice as fast as previously, depending on the country version. Since March 2018 a fast charger has been available which can cut the charging time at a wallbox to under 40 min. (10-80%).

The electric motor takes the form of a separately excited three-phase synchronous motor. This configuration incorporates a winding on the rotor that is magnetised when current flows. The flow of energy from the high-voltage battery to the electric motor is controlled by the power electronics that are compactly integrated with the drive unit.

Thanks to the power characteristics of the electric motor, the smart needs just one single fixed gear ratio. There is no need for any gear changing – a major advantage in dense city traffic. To reverse, the engine’s direction of rotation changes.

The ECO mode is a particularly energy-efficient drive program. The radar-based recuperation controls energy recovery according to the traffic situation. To save energy and extend the range, the smart EQ fortwo and smart EQ forfour also feature pre-entry climate control.

With the “smart EQ control” app a wealth of information specific to the electric vehicle can be called up via smartphone, tablet or PC and functions such as pre-entry climate control or intelligent charging can be conveniently controlled remotely.

In conjunction with the Cool & Media package, the electrically powered smart models also feature the Charge Spot Finder. This function enables electricity charging stations nearby or in a certain city to be found with the navigation system.

The smart fortwo is produced at a purpose-built plant in the French town of Hambach – a clear commitment to Europe as a manufacturing base.

The smart plant, also known as smartville, began production in 1997. On-site system partners deliver modules, some of which are prefabricated, directly to the assembly line. In some instances they install their prefabricated modules in the smart themselves. This minimises the scope of transport and logistics operations. Flexibility, just-in-time delivery and minimum delivery times at all levels are among the factors that set benchmarks to this day.

There is close cooperation between the smart plant in Hambach and Novo Mesto, the Renault production location in Slovenia at which the smart forfour is produced under the partnership agreement between smart and Renault. The involvement of the production and quality experts from the Hambach plant ensures that all vehicles of the current smart generation meet the smart quality standards, irrespective of where they are produced.

A milestone: 20 years of smart

The developers at Mercedes-Benz were already occupying themselves with the “car of the future” back at the beginning of the 1970s, evolving new, revolutionary approaches which ultimately led to the concept of the super-compact automobile with a length of two and a half metres. Some time passed before the pioneering safety concept was developed which allowed hallmark Mercedes safety to be achieved in an extremely short automobile.

In 1989, Nicolas G. Hayek, the inventor of the Swatch wristwatch, announced his intention to launch a small city car on the market. In order to turn this idea into successful reality, Hayek sought out Mercedes-Benz as an experienced partner. The two partners duly established Micro Compact Car AG, with its headquarters in Biel, Switzerland.

The smart city coupé finally had its world premiere at the Frankfurt International Motor Show in 1997. Production and sales began in 1998. In the same year, smart became a wholly-owned subsidiary of Daimler-Benz AG (now Daimler AG).

Already a classic today: on show at the Museum of Modern Art since 2002

Despite its young age, there is no disputing that the smart fortwo with its unique character is already a classic automobile. While still in production, a smart fortwo was the only vehicle to find its way into the permanent collection of the world-famous Museum of Modern Art in New York as a “contemporary design classic from the final decade of the last century”.

[i] The figures stated were determined according to the prescribed measuring process. They constitute the NEDC CO2 figures in accordance with Art. 2, no. 1 of Implementing Regulation (EU) 2017/1153. The fuel consumption figures were calculated on the basis of these figures