According to initial reports, the vote share for third parties and independent candidates in Malta’s European elections this year, accounts for 7%.

If correct, this projection accounts for an almost 3% increase on a decade ago (2009) but a narrow increase of less than a percentage point since the 2014 election (6.59%).

While the official numbers on how the third parties and independents did in Malta’s election, it is interesting to see from the 2004 election onwards, vote share for the Alternattiva Demokratika had dropped dramatically from 9.33% at the first election to the EU parliament followed by an almost 7% decrease in the 2009 election (2.34%), with a slight increase in the 2014 election (2.95%). 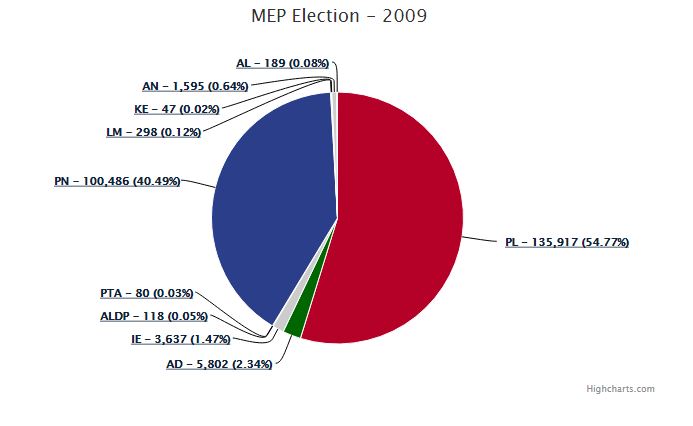 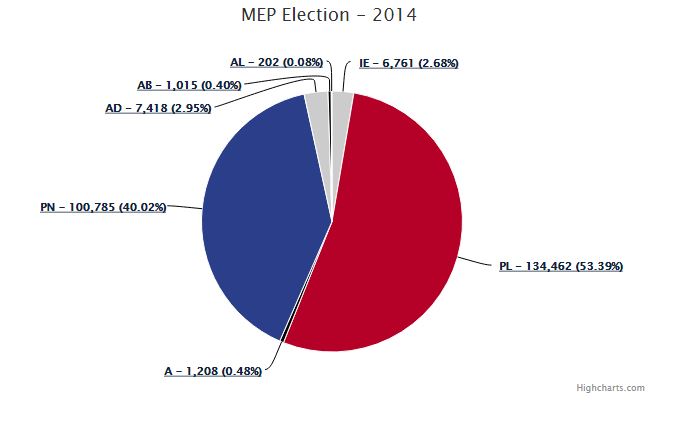 Although Independent candidates receive a 1.47% vote share in the 2004 election, much smaller parties in the next two elections receive very small proportions of votes of less than a percentage.

According to the initial figures for these European elections, the Labour Party is reported to have received 55% of the votes.

This preliminary result shows an over 3% increase on the 53.3% percentage that the Labour Party won in the 2014 European Elections and reflects the highest recorded number of votes for the party since Malta ascended to the Union in 2004 (48.42%).

The European polling aggregator ‘Europe Elects’, quoting Labour sources, says that the numbers could be closer to 56%.

While the initial reports show massive increase for PL, it also shows a possible 3% drop in vote share for the Nationalist Party.

This year’s preliminary result shows that PN to have dropped to 37%. This is two percentage points below their vote share in Malta’s first European Parliamentary elections.

If these projections are correct, this could mean the Labour Party win 4 seats in the Parliament, one more than the 2014 – 19 Parliamentary legislature and the Nationalist Party reducing to 2.