“We are disgusted by fraud and corruption, both material and moral, but we should not lose hope.”

Following the election result the Bishops Conference president, Archbishop Stanislav Zvolensky of Bratislava, said he expected the new government to ensure “justice, reconciliation and the protection of human dignity”.

The Bishops, in their pastoral letter, after noting that “It is a serious matter to cheat over property” added that it was not less serious when it comes humanity.

“So let us not give in to the dishonesty of new ideologies – our consciences will never be in conflict when our decisions are made in light of the Gospel”.

The bishop’s pastoral letter acknowledged that some doubted whether voting was worth it but the bishops then appealed to voters not to be carried away “by watchwords playing on emotions and slogans evoking non-existent threats. Let’s uphold peace and common sense, and beware those who incite enmity”.

Two-thirds of the population of Slovakia are Catholics. In recent years the Church clashed with the state over same-sex marriage, sex education in schools and state funding for abortion.

Matovic given mandate to form a government

Besides corruption, the electoral campaign was characterized by people’s anger over the 2018 murder of the anti-abortion journalist, Jan Kuciak. Reports suggested the politician could obtain a constitutional majority for a centre-right coalition, after premier Peter Pellegrini’s centre-left Smer-Social Democrat party conceded defeat after a decade in power.

On Wednesday Slovakia’s president, Zuzana Caputova asked Igor Matovic the leader of the winning party to form a new government.

The party of Ordinary People, an anti-corruption centre-right populist party, netted 25% of Saturday’s vote which resulted in 53 seats in the 150-seat parliament.

The President said her country needs “a strong, legitimate and new government soon.”

Matovic is expected to have talks with the pro-business Freedom and Solidarity party, which elected 13 seats and the conservative For People which elected 12 seats. Together they will control 78 seats and a majority of the Slovakian Parliament. 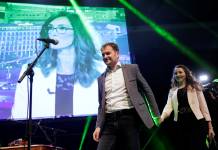