The third suspect linked to the Sliema double murder has been arrested in Cadiz, Spain on Sunday afternoon.

Doctor turned banker Christian Pandolfino (58) and art dealer Ivor Maciejowski, 30, were shot dead at their residence on Locker Street, Sliema on Tuesday 18 August at around 10.20pm.

Through CCTV footage, the police identified the three men, two of which have been charged in court. Both men have pleaded not guilty to the charges brought against them.

The third man who is also a foreign national was arrested following a joint collaboration between the Maltese and Spanish law enforcement officers.

The police said that the suspect left the country on Friday 28 August, prompting the authorities to initiate a process by which a European Arrest Warrant is issued, to apprehend the third suspect and have him extradited back to Malta. 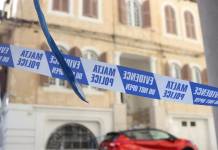 The man will face proceedings in a Spanish court where the European Arrest Warrant will be validated before he is extradited to Malta to face criminal procedures.