A 25-year-old man who was charged with the double murder of Christian Pandolfino and Ivor Maciejowski, was remanded in custody after he was arraigned in court before Duty Magistrate Nadine Lia. The man pleaded not guilty to the charges brought against him.

The man was charged with detaining and murdering Pandolfino and Maciejowski on 18 August. The man was also accused of violent theft and stealing an amount which exceeds €2,329.37, of carrying a weapon and ammunition without the necessary licence, of buying a stolen vehicle, of stealing two sets of number plates, of making use of a vehicle with stolen number plates and of having breached bail conditions.

Relatives of Ivor Maciejowski, a British national of Polish descent, were present in the courtroom.

Lawyers Dr Joe Giglio and Roberta Bonello appeared for the families of the victims.

On Wednesday, the police arrested a second man linked to the murder, after receiving information that a person involved in the murder was hiding in a hotel in Gżira.

Police Inspector Grech says that he was going to suggest that it is first the medical team at CCF that examines the accused. He asks to leave the courtroom to consult as the Magistrate would require the name of the psychiatrist.

Dr Roberta Bonello who is representing the families of the victims, presented a note to be part of the proceedings.
Monique Agius
12:52 The prosecution does not object.

The court upholds the request.
Monique Agius
12:49 The defence mentions that the accused went through a trauma.

The prosecution asks the defence to elaborate on the trauma.

The defence explains that the accused needs an assessment of his current state of mind. The defence clarifies that this examination is not a plea of legal insanity.

The request is for a clinical examination of the accused to assess any medical treatment he might require.
Monique Agius
12:46 The defence is not requesting bail at this stage of the proceedings. 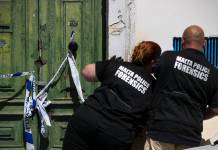