The white SUV used by the alleged hitmen in the murder of two men in Sliema has been found by police in the Pietà multi-storey car park next to St Luke’s Hospital.

The state broadcaster TVM reported that equipment used to disrupt radio and mobile signals was found inside the SUV. Other objects which have been found inside the car further corroborate the theory that the murder was carried out by possibly professional foreign hitmen.

The white SUV had been reported stolen two years ago from Gżira, but carried number plates which were stolen recently from another car which was parked in Paceville. 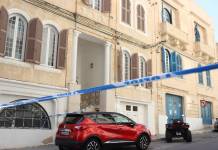 The aggressors are believed to have been in the victims’ house only four minutes, firing six shots. The motive for the crime remains unclear.

The police are not excluding that the murder was commissioned by a third party.