The gathering of evidence against 36-year-old Viktor Dragomanski, the second suspect charged in the Sliema double murder, continued on Friday.

The director was informed that his vehicle was stolen by Police Inspector James Grech.
Monique Agius
11:03 The officer says that on 27 August a man filed a report about a Skoda being stolen from the Regina Showroom. The officer says that the Skoda was brought down during routine cleaning. The car was forgotten on Triq Isoaurd.

Another doctor, Dr Mike Spiteri, examined Maciejowski who was on the landing in a pool of blood. He was also pronounced dead on site.
Monique Agius
10:31 Doctor Jonathan Joslin from the Emergency Department the takes the witness stand.

He informs the court that he has finished giving evidence related to Dragomanski's role.
Monique Agius
10:25 Kristiansen was registered at a residence but could not be traced.
Monique Agius
10:24 Muka was arraigned on 27 August before Magistrate Nadine Lia. Muka pleaded not guilty to the charges.

Dragomanski was arraigned a day later before Victor Axiak where he pleaded not guilty to the charges.
Monique Agius
10:22 When interviewed, Dragomanski says that he was with Muka and his friend Jesper Kristiansen. He identified Kristiansen when shown a photographer. He told the police that he stayed in the car and only joined later.

During the last sitting the court heard how Dragomanski was offered an unspecified “job” which he took up without questioning. The man shifted the blame on the prime suspect Daniel Muka telling the police that “he ruined his life in four minutes”. 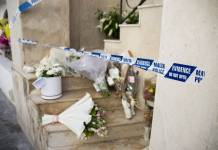