Three Sudanese men who tried to stowaway out of Malta on Thursday ended behind bars.

Tarek Akutan Kitiel, 18, Djibrilf Adam, 18, and Nasreddin Salem, 29, were escorted to court under arrest. The Sudanese nationals living at the Ħal Far open centre, were charged with embarking a ship without proper authorisation.

All three accused pleaded guilty in front of magistrate Caroline Farrugia Frendo. During the proceedings the trio were assisted by an interpreter.

Legal aid lawyer Martin Fenech appealed for a suspended sentence. However, the court condemned the accused to six-months each behind bars.

In December a group of eight stowaways was found aboard a ship at the Malta Freeport.

December incident
Migrants try to stowaway aboard ship at Freeport 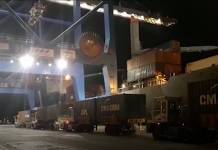 Migrants try to stowaway aboard ship at Freeport