Abigail Tanti, Charlene Farrugia’s boyfriend’s sister, wanted to report Charlene missing only 3 hours after having met up with her.

Abigail Tanti testified that she came to know Charlene after she was dating Tanti’s brother, Jonathan Attard, some 12/13 years ago. She doesn’t know how long they spent dating, but they lived together for a while. At the time, Tanti was in a relationship with Jesmond Cassar.

A timeline of the day Charlene Farrugia disappeared

Tanti and Charlene met up the morning of her disappearance. Tanti testified that in the afternoon, she and Cassar were to pick up Charlene at her home in St. Paul’s Bay. At the time, Attard (Charlene’s boyfriend and Tanti’s brother) was in prison.

When they went to pick her up, no one answered the door. They found Attard’s sons waiting outside the door after school, as Charlene had been their guardian while Attard was in prison. They told Tanti that Charlene wasn’t home. Tanti used a key to let herself in, and found that Charlene was not there. Tanti and Cassar looked for her car, but couldn’t find it.

After confirming with Charlene’s parents that her whereabouts weren’t known to them, Tanti went to report her missing at the Qawra police station, only to be told that only family members can report someone missing.

During the counter examination, Tanti was asked why she went to make a missing person’s report when she had seen Charlene just a few hours prior. Furthermore, she was asked why after the report was made, she called to ask the Police to inform her of any updates, and that she would be passing on those updates to Charlene’s family.

Tanti said that she does not remember calling the Police to tell them this, but a Police report confirms this request. She also stated that she doesn’t remember why they felt the need to report her missing within 3 hours of seeing her.

Where was Charlene murdered?

Charlene was murdered in an apartment in Triq Efesu, St. Paul’s Bay, an apartment owned by Wood’s girlfriend at the time. Charlene used to live on that same street.

This was confirmed in Court today, following the testimony of two police officials involved the investigation.

In November and December 2008 (at the time of Charlene’s murder), it was Woods staying in this apartment. He then went to prison, and his girlfriend lived there alone. In 2011, Woods lived in it once again. Afterwards, the owner lived there with another man with whom she had a relationship. The apartment was also empty for some time. 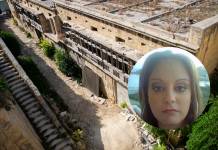 Police confirms remains being those of Charlene Farrugia – media reports