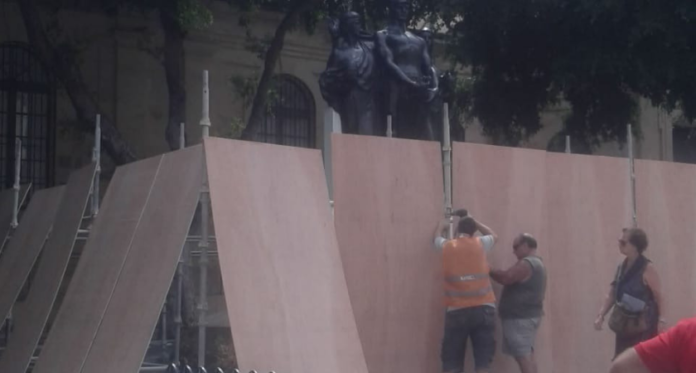 The Great Siege monument is being covered with wooden panels just a couple of hours after the President of Malta Marie-Louise Coleiro-Preca honoured the same monument on Victory Day.

On Thursday Newsbook.com.mt has sent an email with a set of questions tried to Minister for Culture Owen Bonnici on the alleged works on the monument as per his request. We are still waiting a reply.

On the same day Daphne Caruana Galizia’s shrine on the monument was cleared before the Victory Day ceremonies. Activists replaced the picture of the assassinated journalist back on Friday after ex-Partit Nazzjonalista leader Simon Busuttil had found the print in a rubbish cane nearby.

Padlocks hung for truth and justice

Coryse Borg   June 3, 2020
BMIT Technologies and EBO.ai have entered into a strategic partnership that will allow BMIT Technologies to offer an effective and innovative customer support tool developed by EBO.ai to its customers, worldwide.

Coryse Borg   June 3, 2020
The Malta Philharmonic Orchestra, in collaboration with the Valletta Cultural Agency and with the support of Bank of Valletta, has launched a music video Don’t Stop Believin’, featuring Matthew James Borg. The audiovisual production pays tribute to recovered COVID-19 patients.

Amy Borg   June 3, 2020
The association referred to the Prime Minister’s announcement, last Sunday, regarding the lifting of most of the COVID-19 restrictions as from Friday 5th June and, in particular, to the statement that “all workers are expected to return to work this Friday”.