Two siblings who stand accused of drug trafficking have been granted bail.

The man (31) and woman (34) of Bormla were arrested in April after after a two-month surveillance operation.

The police had received reports concerning drug trafficking. During the police raid, more than a kilo of cannabis, around two kilos of synthetic drugs and cocaine were seized.

The brother was arrested after leading officers on a car chase which eventually ended in Bormla. In his car, police found thousands of euros in cash, cocaine, a synthetic drug, a pistol and a machete.

He was then charged with drug trafficking, illegal possession of firearms, handling stolen property and recidivism.

During a raid at his sister’s house, the police seized various drugs.

His sister was separately charged with aggravated possession of cocaine, cannabis and psychotropic drugs. Both siblings are facing charges of money laundering.

The compilation of evidence continued on Thursday with police officers and owners of the garages targeted in the searches testifying in the criminal proceedings.

The Court presided over by Magistrate Neville Camilleri upheld a fresh request for bail for the siblings.

The bail was given against a personal deposit of €30,000 each. The pair were ordered to sign the bail book daily while abiding by a curfew imposed on them by the court. 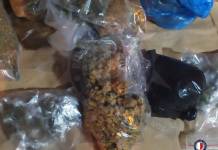