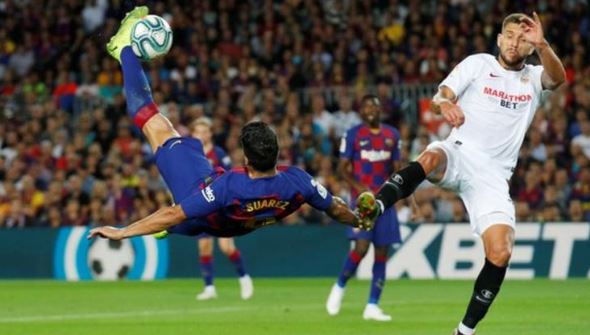 The first league defeat for Inter and extraordinary home defeats for Bundesliga and English Premier League champions Bayern Munich and Manchester City characterized the European domestic league headlines this weekend. Bayern Munich fresh from their emphatic Champions League win against Tottenham Hotspur lost at home to Hoffenheim. Sargis Adamyan scored twice to condemn Bayern to their first home league defeat in a year. Robert Lewandowski had briefly leveled the score for Bayern with his 15th goal in seven games.

Borussia Mönchengladbach are the sole leaders of the Bundesliga after their victory over Augsburg put them 1 point clear over Wolfsburg and 2 points over a pack of 5 teams with 14 points. In England Manchester City suffered a shock home defeat to Wolves which leaves them 8 points behind league leaders Liverpool. The Reds continued their one hundred percent record with hard earned home win against Leicester City. James Milner scored the decisive penalty in the 5th minute of added time, The win was the 17th win a row for the Klopp’s team.

The weekend also saw Manchester United suffer a one nil defeat to Newcastle United on Tyneside, making this their worst league start in over 30 years. Spurs also suffered a surprise defeat to Brighton and Hove Albion. Aaron Connelly was Brighton’s hero scoring two goals in the three nil victory.

In Italy Juventus leapfrogged Inter beating them at the San Siro, in the battle for top spot before the international break. Paulo Dybala opened the score for the visitors on 4 minutes but Inter equalized through Martinz’s from the penalty spot 18 minutes into the game. The game seemed to be heading for a draw until the Argentinian Higuain found the net after a brilliant team move. This was Inter’s first defeat this in the Seria A this season.

AC Milan beat Genoa after Pepe Reina saved an injury time penalty thus easing some of the pressure on manager Giampaolo, The match was incident-packed with four red cards and two penalties. Milan had suffered four defeats in their opening six games and doubts were mounting about the former Sampdoria manager who had replaced Gattuso in June. The victory moved Milan up 13th place in the table while condemning Genoa to their fourth defeat of the season.

In Spain Real Madrid are perched at the top of La Liga with 18 points after they held on to victory against 4th placed Granada. Benzema and Hazard had given Real a two goal margin by the end of the first half, Luka Modric scored the third on 61 minutes only for Granada to fight back with two goals in 8 minutes. Rodriguez scored Real’s fourth on the break to give Zidane team the 3 points, keeping them on top of the league and unbeaten after eight games.

Barcelona move up to second place after a big win against Sevilla at the Nou Camp. A sublime overhead kick from Luis Suarez opened the scoring for the Catalans, Vidal and Dembele made it look easy before half time as they put their names on the score sheet. When Sevilla conceded a free kick a couple of meters outside their penalty box it was Lionel Messi who curled the ball into the top right corner. Barcelona ended the game with nine men as Dembele and Araujo were sent off in the last minutes of the game.

Sport is an indispensable educational tool

John Paul Cordina   July 8, 2020
The reputational damage inflicted on Malta as a result of numerous corruption scandals in recent years have left Malta unable to make its case in the EU, according to Nationalist MPs Mario de Marco and Kristy Debono.

John Paul Cordina   July 8, 2020
The two independent opposition MPs – Godfrey Farrugia and Marlene Farrugia – have called on their PN colleagues who voted against PN leader Adrian Delia in a no-confidence vote to immediately go to the President so that a new Leader of the Opposition may be appointed.