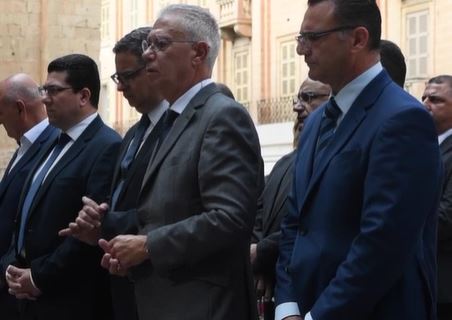 ‘Shame on you, bunch of crooks’

That’s what Helene Asciak, one of the sister’s Daphne Caruana Galizia, told a Nationalist Party delegation attempting to lay a wreath at Daphne’s memorial in Valletta today.

The wreath that the Opposition leader Adrian Delia laid at the memorial was quickly thrown from the site and left is a mess on the pavement.

‘Go away from me please,’ Ms Asciak told the PN MPs, adding that the delegation was only doing the wreath-laying as a publicity stunt.

As Dr Delia prepared to lay the wreath, Ms Asciak told him to ‘pay your respects in court’, referencing the libel cases Dr Delia had brought against Caruana Galizia over allegations of money laundering through a Soho prostitution ring over a decade ago.

‘You have absolutely no respect,’ she told the delegation.

The wreath was then thrown from the memorial and left strewn on the pavement.