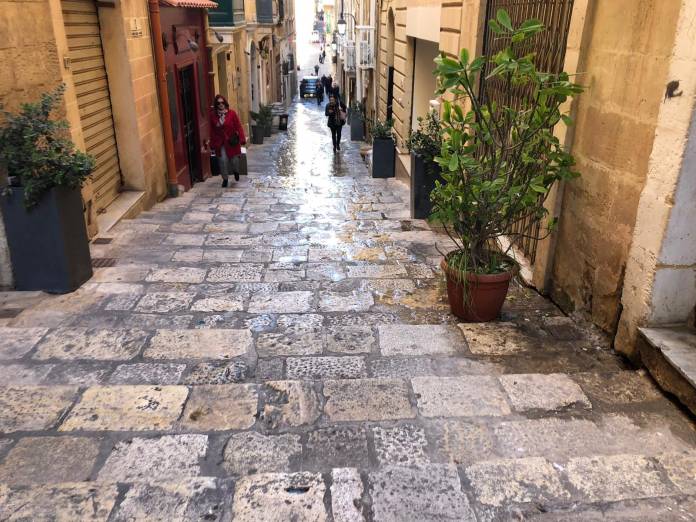 One of the busiest streets of Valletta, which has been plagued with dirty water and seeping sewage for a number of years, will hopefully see the situation resolved in the coming week, Newsbook.com.mt has learnt. Valletta Mayor Alfred Zammit told this newsroom that the works will begin on Monday.

A strong whiff of sewage sometimes greets pedestrians on Ordinance Street without them having to walk down Strait Street. The seeping sewage and dirty water not only poses a problem to those walking up and down Strait Street but also to patrons of nearby bars and restaurants.

The dirty water and sewage seems to be percolating from a unit first believed to fall under the Housing Authority’s responsibility. Later, it was found to be that the unit in question is in possession of the Land’s Authority.

Sources speaking to this newsroom said that the problem has been ongoing for a number of years despite reports being filed with the relevant authorities.

Newsbook.com.mt reached out to the Public Health Authorities, to the Health Ministry and to the Valletta local council on the matter.

Action to be taken on Monday – Valletta Mayor

Speaking to Newsbook.com.mt, Valletta mayor Alfred Zammit explained that while the matter does not fall within the Council’s remit, it has intervened to see the issue solved. He added that the issue will be resolved next week. The mayor confirmed that the works will commence on Monday.

In his comments, Zammit said that the case was being investigated by Health Inspector Mr Tony Sammut who was in contact with the Housing Authority. He added that from their investigation it transpired that the issue is a broken water supply pipe from a unit which is not Housing but in possession of the Land’s Authority.

The case has been referred to Martin Bajada from the Land’s Authority.

The premises in question has been locked and sealed according to Zammit, since it was regularly squatted.

An official from the Health Regulation said that the matter is still being investigated by an official of the Directorate. He added that the source has not yet been identified.

In his response, the official wrote:

“I would like to inform you that this matter is being investigated by an official of this Directorate however the source has not yet been identified.  Matter will be followed up in the coming days and action will be taken accordingly.”