During Wednesday’s sitting of the public inquiry about Daphne Caruana Galizia’s murder, Joseph Bugeja revealed that the Principle Permanent Secretary Mario Cutajar had attended a number of meetings held by the Security Committee.

Newsbook.com.mt asked Bugeja about Cutajar’s presence, however no replies were forthcoming. Bugeja didn’t give a reason for his refusal to answer the questions being put to him by Newsbook.com.mt.

Cutajar’s presence during these meetings was revealed by Bugeja after being questioned by lawyers Jason Azzopardi and Therese Comodini Cachia during the public inquiry. 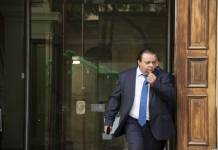 After today’s public inquiry sitting ended, the Office of the Principle Permanent Secretary released a statement saying that the person acting as the head of the civil service had been acting as the Security Committee’s secretary since 2001.

According to the statement, the decision in 2001 was approved by then PM Eddie Fenech Adami.

The Office released a photo of the minutes showing Fenech Adami’s signature approving this decision.