Petrinja in Croatia struck by a magnitude 6.4 earthquake.

A 12-year-old girl died while many are being reported injured. Petrinja the epicentre of the earthquake is 31 miles from Zagreb. Five more people died in the areas of the town of Glina.

Reports are claiming that the hospital in Petrinja is amongst the damaged buildings.

The earthquake could be felt from the Croatian capital Zagreb. According to Reuters, tremors were felt in neighbouring countries Serbia and Bosnia and Herzegovina.

Petrinja’s mayor, Darinko Dumbovic, said on a local TV broadcast, “Half of the city no longer exists. The city has been demolished, the city is no longer liveable. We need help.”

The GFZ German Research Centre for Geosciences reported that the earthquake struck at a depth of 10km (6 miles).

In March, an earthquake had devastated Zagreb during the coronavirus lockdown. 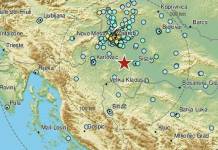