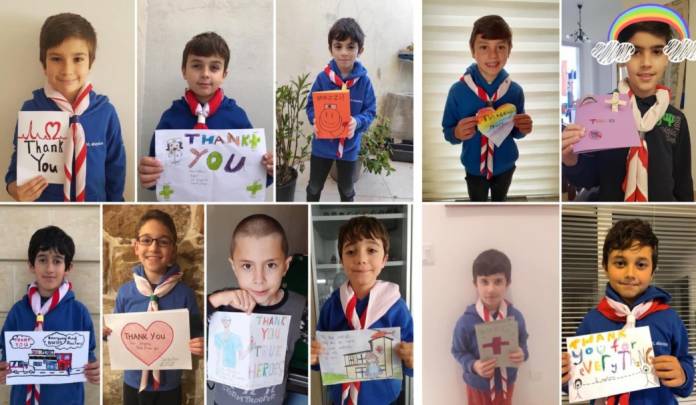 • Over 3,500 Scouts are active and scouting from home
• Maltese Scouts took part in special edition of Jamboree on the internet
• Scouts support their local communities by donating provisions to the Food Bank, offering their premises as shelter for medical workers and produce 500 face shields for the medical front liners in Gozo

When you mention Scouts, the first thoughts would naturally be outdoors, campfires, camping, hiking and a ton of other outdoor activities.

Scouting in Malta has, of course, been impacted due to the current COVID-19 situation. After an overnight decision on the 12th March 2020, suddenly over 3,500 adults and youths from around Malta and Gozo had to stop all activities and meetings.

When the suspension of scouting was announced, to keep scouting going and keep thousands of youths engaged, the adult leaders sprung into action.

The reach of these activities went far and wide; in fact, one of these activities called ‘Scout @ Home’ organised by the Mosta Scouts, was picked up by the World Organisation of the Scout Movement’s (WOSM) social media team and posted to over 600,000 people around the globe.

As things progressed, Scouts started to hold their meetings with their leaders, using a variety of online tools. These meetings soon turned into a weekly appointment to stay in touch with the youths and follow the progress of their Scouting at Home programmes. The programmes were carefully designed by their leaders to include all the stages of youth development, with an increase of focus on the emotional and physical stages of development.

“Scouting from home was a bit of a challenge at first, especially getting accustomed to having to come up with new ideas and activities for our youth members to complete from home. After a few meetings between the leaders we were able to create some interesting tasks and challenges for them to attempt and keep them active whilst at home. Overall it was an overwhelming task at first but gladly, with a good team of leaders, we have managed to make it work so far and can’t wait to go back to having activities outdoors!” says Beppe, 23, from Cospicua.

“I haven’t been able to go outside much, since I am an adventurous person and I love spending time outside it hasn’t been easy. However, it has really made me aware of some things I used to take for granted before,” says Rosie, 16, from Xagħra, Gozo.

The 1st Sliema group, who were supposed to be at their annual Group Easter Camp, came up with a Camp-at-Home programme where the Scouts had tasks to do each day simulating life at camp.

Realising that this suspension of scouting is going to be longer than expected, Scout groups intensified their Scouting from Home programmes and meetings. Scout flags were being raised at Scout Group’s headquarters in different localities, to give a ray of hope to those passing by. Several interesting challenges started to take place on Instagram such as the #ScarfFlipChallenge where Scouts would upload a video of themselves on Instagram flipping their Scout Scarves onto their heads and around their necks from their feet.

“Scouting at home is not as active and on the go as normal Scouts was. It’s still fun though, as we get to see our brother scouts and friends. The online meetings are intuitive and interactive. It’s great fun and after each meeting I feel as though I’ve learnt something new,” says Beppe, 14, from the 1st Sliema group.

Scouts all around Malta also joined a few world-wide activities such as Earth Hour and the special edition of the Jamboree on the Internet (JOTI) which is normally organised in October together with the Jamboree on the Air (JOTA). WOSM created a special edition of the JOTI where millions of Scouts from all over the World got to interact and take part in Zoom meetings, online interactive activities, live chats and also got the chance to tune-in to an online call with Bear Grylls, the Chief Ambassador of World Scouting.

“Scouts has been a platform to unplug from the fast and modern life we find ourselves in, and to grow both as an individual as well as a member of society. Scouting at home has definitely been challenging; not only is it hard finding the link to nature, but it’s also been hard to maintain ties with other Scouts and people,” says Adiel, 22 from the 1st Sliema group .

On the 19th April 2020, a representation from 40 groups around Malta and Gozo went live on Facebook for the #VirtualScoutPromise national activity. This activity saw over 1,000 Scouts tune-in to the live video and renew their Scout Promise together. Social media was then flooded with videos and photos of Scouts of all ages ranging from five-year-olds to 65+-year-olds renewing their promise. This activity replaced the usual Annual Scouts and Guides Annual Rally in Valletta organised by The Scout Associating of Malta and the Malta Girl Guides.

“The fact that I couldn’t practice bag pipes with my friends seemed a little bit off, however, I took the opportunity to put in some personal practice and this really helped me to improve my personal skill. I really can’t wait to be back at our HQ enjoying the sound of a full pipes and drums band,” says Isaac, 17, from Msida.

The adult leaders have become more creative and have adapted very well to the situation Scouting has found itself in. The leaders are working extremely hard to keep the youth members engaged and adapting the youth programme to be achieved from home with minor adjustments. The Fgura Scouts came up with a cool rendition of Queen’s – Bohemian Rhapsody and posted the video to Facebook, Msida Venture Scouts started a ‘scarf on tour’ challenge on Instagram, and we have seen a number of videos going round on social media of other Scout Groups taking part.

The Training Department within The Scout Association of Malta have also stepped up their game during these challenging times. They transferred their monthly leader coffee-to-go meetings online, transferred the adult leader training one-to-one interviews online, increased the resources for e-learning and started the process to conduct adult leader training courses online too.

Scouts from around the island have also engaged within their communities. The older Scouts have been helping the elderly with their shopping, assisting their local communities were needed, donating provisions to the Food Bank, spreading positive vibes within their towns with posters. Scout groups have also offered their premises as shelter and safe havens for people in the medical profession. Victoria Scouts Pack also went as far as to ‘adopt an elderly person’ each and stay in touch with them via phone to keep them company while they are stuck at home.

One of the adult leaders from Xagħra, Gozo teamed up with another three individuals and made 500 face shields for the medical frontliners in Gozo.

“I had been seeing members of Maltese 3D printing communities printing face shields for Mater Dei but, being in Gozo, I did not think much about it, since it would have been difficult to get them to Malta. So, another two Gozitans and I agreed, and we started the process of printing 500 face shields for our Gozitan health workers,” says Savio, 42, from Xagħra, Gozo.

More information about the Scouts may be found on their website.