Finance Minister Edward Scicluna is either spineless or complicit, Partit Nazzjonalista said in a statement on Wednesday, after the Finance Minister was summoned to testify in the public inquiry into the murder of investigative journalist Daphne Caruana Galizia.

In a statement signed by Opposition spokesperson for finance, Mario de Marco, the Opposition remarked that the more Scicluna sought to detach himself from disgraced former Prime Minister Joseph Muscat, the more he confirmed that he was at best spineless and at worst confirmed that such actions were taken with Scicluna’s blessing. 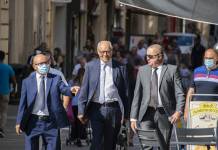 “It is no wonder that month after month, different reputable international institutions continue to place Malta among shady jurisdictions, making it an even harder task for the authorities to fight grey-listing by Moneyval, rather than focusing on a much-needed recovery for the Maltese economy,” the statement reads.

Describing Scicluna’s testimony as ‘incredible’, the PN noted that the finance minister was an integral part of Muscat’s administration and had been pushed heavily as the ‘financial guru’ of the Partit Laburista in the 2013 electoral campaign which brought Muscat to power.

“Under Scicluna’s financial watch, Labour witnessed the worst scandal-ridden legislature in history, with major stories of abuse and corruption relating to the Panama Papers, money-laundering-ridden banks, uncovering of secret offshore companies and a number of shady Government-sponsored financial deals such as the Electrogas energy deal and the privatisation of Malta’s three major hospitals to a company with zero experience in health administration whose ultimate beneficial owner was never disclosed.”

The Opposition noted that Scicluna ignored the fact that as a finance minister he had signed off on most of those deals. He had every opportunity to express his dissatisfaction by voting accordingly but failed to do so, repeatedly, the PN remarked.

“He moreover repeatedly voted his confidence in Joseph Muscat and the “inner circle” composed of Konrad Mizzi and Keith Schembri that he now laments of.”