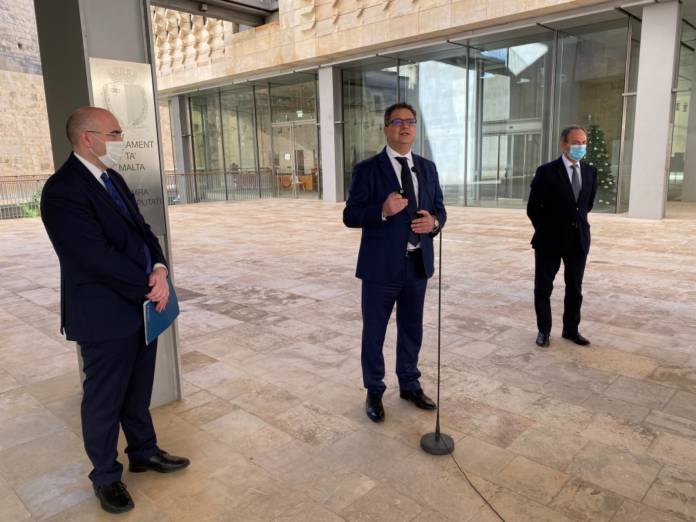 The Nationalist Party is adamant that the appointment of former Finance Minister Edward Scicluna as Governor of the Central Bank of Malta would cause great harm to the reputation of the country at a time when such harm was ill afforded.

The party held a press conference on the matter outside Parliament on Saturday afternoon, addressed by its former leader Adrian Delia and fellow MPs Karol Aquilina and Mario de Marco.

Scicluna resigned from Cabinet last month, paving the way for the appointment of Prime Minister Robert Abela’s former chief of staff Clyde Caruana as his replacement. But he was immediately announced to be the next Central Bank governor, replacing the outgoing Mario Vella, who was appointed to be special commissioner for economic, financial and trade relations with the UK. The former minister will head the Central Bank as from next year, and will also be resigning his seat in Parliament to do so.

Delia, who as party leader had filed a Court case seeking the revocation of the controversial hospitals concession granted to Vitals and since transferred to Steward, argued that this case provided ample evidence of why Scicluna was unfit for purpose.

Aquilina, the party’s spokesperson on good governance, highlighted that Scicluna’s term as Finance Minister was marked by the worst examples of poor governance in the country’s history. He also recalled that Scicluna was still subject to a magisterial inquiry over the Vitals deal and argued that for this reason alone he should not be appointed to the top role at the Central Bank.

De Marco, the party’s spokesperson on finance, emphasised the importance of the role that Scicluna was set to assume, and observed that Scicluna was Finance Minister when a damning assessment of Malta was made by Moneyval, the Council of Europe’s anti-money laundering body. The same reputational issues which were also flagged by credit rating agency Fitch in a recent report have also led Maltese banks to lose correspondent banking services, the MP added. Additionally, Scicluna was minister when abusive practices such as the granting of a bank guarantee to ElectroGas took place.

In a reaction, Partit Laburista said that Edward Scicluna is so competent, that previous Nationalist Governments appointed him to various senior positions including former Prime Minister Eddie Fenech Adami.

PL reminded that he was appointed as Director of the Central Bank and member of the National Committee for the Euro Changeover.

The statement continued praising Professor Edward Scicluna,“who not only achieved the best financial results for our country as Minister for Finance, but also enjoys great respect at the international level”.