EU Commission President Ursula Von Der Layen was clear: Saving lives at sea is not optional. In what can be considered as a hard-hitting State of the EU speech, Von Der Layen homed in on migration, one of the major scourges which the EU has repeatedly failed to address satisfactorily. “Next week, the Commission will put forward its New Pact on Migration. We will take a human and humane approach. Saving lives at sea is not optional. And those countries who fulfil their legal and moral duties or are more exposed than others, must be able to rely on the solidarity of our whole European Union” said Von Der Layen.

Von der Leyen acknowledged this saying that the issue has been discussed long enough. Indeed, in this, she has also echoed the Leader of the EPP Manfred Weber who had spoken to Newsbook.com.mt earlier this year. Weber too had said that the EU will be taking action in this issue during this, the German presidency. 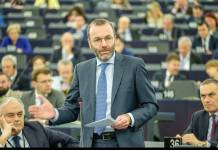 Migration, said Von Der Layen has always been a fact for Europe and it will always be. She acknowledged that the  2015 migration crisis caused many deep divisions between the Member States, while some of those scars, she said, are still healing today. “If we are all ready to make compromises – without compromising on our principles – we can find that solution,” said Von Der Layen. She said that there is no option but to manage the question of migration together, adding that all member states need to step up and pull their weight. “Migration is a European challenge and all of Europe must do its part” said Von der Leyen.

In this context, Von der leyen’s words on racism and xenophobia were particularly relevant. The attitude towards migrants and minorities, she said hsoes everybody that the progress on fighting racism and hate is fragile, it is hard won but very easily lost. “As part of this, we will propose to extend the list of EU crimes to all forms of hate crime and hate speech – whether because of race, religion, gender or sexuality. Hate is hate – and no one should have to put up with it,” said Von der Leyen.

No Backsliding on the rule of law

Von der Leyen had equally strong words on the rule of law and corruption, saying that EU finances will be protected “against any kind of fraud, corruption and conflict of interest. This is non-negotiable,” said Von der Leyen. “The rule of law helps protect people from the rule of the powerful. It is the guarantor of our most basic of every day rights and freedoms. It allows us to give our opinion and be informed by a free press” said Von der Leyen. She added that before the end of the month, the Commission will adopt the first annual rule of law report covering all Member States

The President of the EU Commission said that “Breaches of the rule of law cannot be tolerated. I will continue to defend it and the integrity of our European institutions. Be it about the primacy of European law, the freedom of the press, the independence of the judiciary or the sale of golden passports. European values are not for sale”.