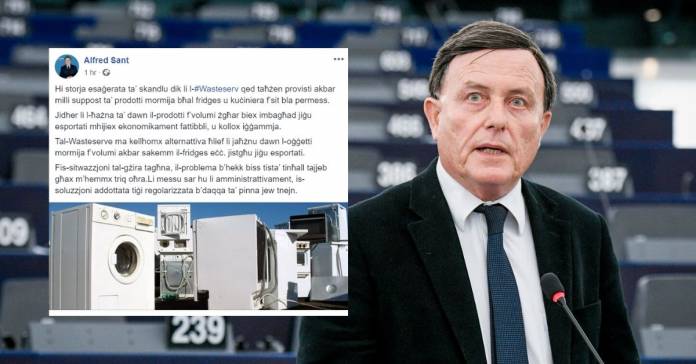 Former Prime Minister and Partit Laburista MEP Alfred Sant has suggested that the illegal dumping at Wasteserv’s facility at Tal-Balal could be regularized by ‘signing off’ thereby making the current situation lawful.

Fridges and other white goods were dumped onto a facility run by Wasteserv in Tal-Balal. Opposition MP and spokesperson for the environment Jason Azzopardi had accused Wasteserv of flouting environmental regulations, adding that it was making use of the site illegally, since it was not covered by a permit.

Fridges and other white goods was stored illegally at a facility operated by Wasteserv. According to EU law, the facility can store up to 49 tonnes of such waste, however, the company said that more than 500 tonnes of waste were stored at the facility.

According to the MEP, the ‘scandal’ was blown out of proportion, explaining that Wasteserv had no alternative but store the waste. He added, that it is not economically viable to export such waste in small quantities.

“Wasteserv had no alternative but store white goods in large quantities until they can be exported,” Sant remarked.