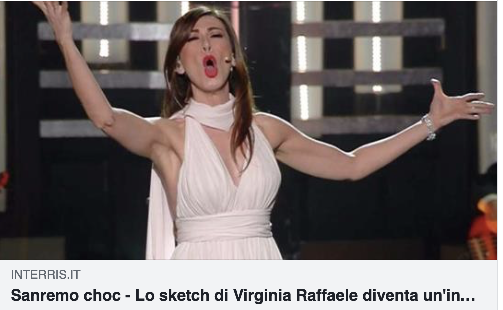 If it’s not one thing it certainly is another and Sanremo would be nothing without a modicum of controversy. La Republica reports diabolical row over a gag by Virginia Raffaele during the Sanremo music festival. The fiendishly talented comedian, actress, singer and impersonator was making fun of the idea that certain songs by the Beatles and others, if played backwards, revealed satanic messages. During the sketch she repeated the word “Satan”, The Italian secretariat of the International Association of Exorcists was not amused, horrified that Sanremo should become “a disquieting pulpit” from which “the name of Satan is invoked five times”.

Noted exorcist Don Aldo Buonaiuto complained that Raffaele “lacked respect, especially for all those people who are really oppressed by the forces of evil.”

It may have ended there had not interior minister and deputy prime minister Matteo Salvini added fuel to the infernal fire by tweeting his support for the exorcist. 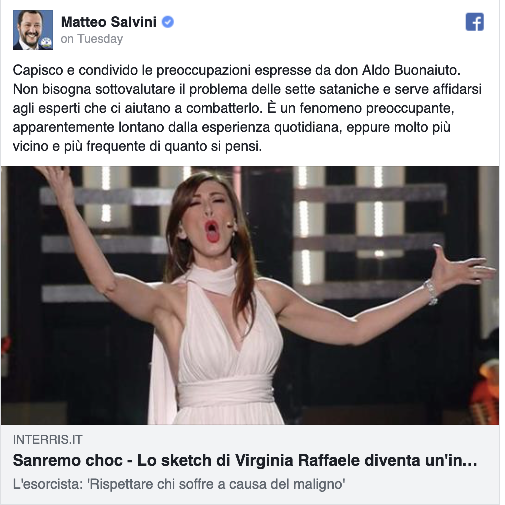 “I understand and share the concerns expressed by Don Aldo Buonaiuto. We shouldn’t underestimate the problem of satanic sects and need to trust the experts who can help us to fight them. It is a worrying phenomenon, which seems far from our everyday experience, but is much closer and much more common than is often thought.”

He was not alone. Maurizio Gasparri of Berlusconi’s Forza Italia party demanded an explanation: “Virginia Raffaele appeared to invoke Satan several times. Just an expression that anyone could have used? Or something more? Raffaele, now a famous artist, needs to clarify the mystery.”

Raffaele took the accusations devilishly seriously, as was clear when she was interviewed on the phone by Marco Travaglio for Italian daily Il Fatto Quotidiana on Saturday with answers meant to be read with a huge tongue in the proverbial cheek.

The Raffaele affair is not the only topic causing one hell of a stink in Italy at the moment. The Ministry of Education’s decision to offer courses in exorcism to religious education teachers has also proved controversial.

Bishops pray for exorcism as anti-Catholic attacks continue in Nicaragua