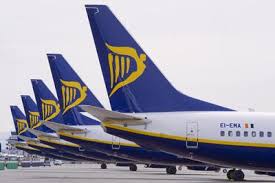 Ryanair said they had to cancel nearly 1,000 flights during May due to a lack of air traffic controllers.

Ryanair is calling on the European Commission and European Governments to act on it before there is any kind of system collapse during the summer months, when air traffic is at its best.

Chief Executive Michael O’Leary said that there are serious deficiencies within the German and British air traffic work.

He also mentioned that in France an air traffic strike is expected during Saturday and Sunday, which will lead to further flight delays.