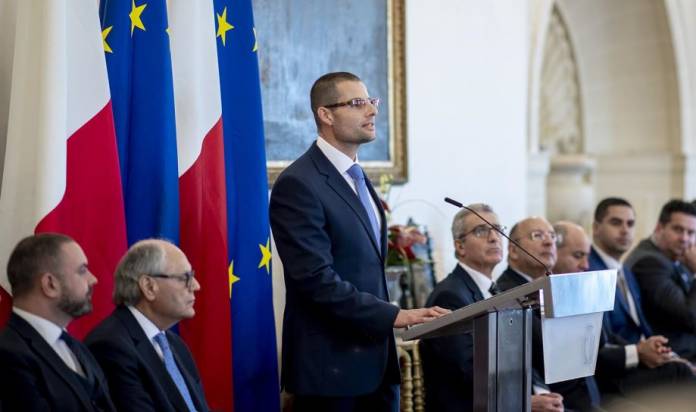 PM Robert Abela said that the rule of law is at the top of his government’s agenda. Opposition leader Adrian Delia said that the government must lead by example when it comes to good governance.

Abela and Delia addressed members of the diplomatic corps in two separate events on the occasion of an exchange of greetings in the New Year.

Abela described 2019 as “an important year for Malta”. He said that progress was registered in the economy with yet another surplus registered. He said that job creation was sustained and that the government continued with its strong social agenda.

On the other hand Robert Abela also said that “questions” about Malta’s rule of law, institutions, and justice system “were raised”.

“I tell you now that these challenges are at the top of my Government’s agenda and our first decisions are ample proof. Just to mention one, I have tasked a new Minister for Justice and Good Governance to give these issues the importance they deserve. We will work tirelessly to deliver at home,” said the PM.

According to the PM, Malta’s Foreign Ministry with Evarist Bartolo leading it will ensure “good contacts” with the countries having diplomatic relations with Malta.

Abela mentioned efforts being made in Africa and Asia. Latin America is the next “uncharted territory” which Malta is looking to explore. A mission may be established there.

“A society cannot be inclusive unless it addresses the needs, rights and responsibilities of all its colourful members,” said Abela.

“And let’s face it, irrespective of all our efforts in seeking to achieve a modern society, we cannot succeed when approximately half of our population is being held back.

“We must further women’s economic and political empowerment, with their involvement in decision making processes.”

In a separate event, Adrian Delia said that Malta’s reputation has been “seriously tested by the recent political events in our local affairs.”

He said that the PN was fighting against bad government and corruption which brought the resignation of Joseph Muscat.

“We will continue in our pursuit, and actively call for good governance and for clean government.  People in government must lead by example, and those holding public office must ensure a clean administration.  The country’s image and reputation abroad must return to what it was, with strict and scrupulous adherence to the rule of law and subscription to high principle,” said Delia.

Adrian Delia asked those gathered if they realise how delicate Earth is. He said that some scientists think that this is the last generation that has the power to change things for the better.

“We are the last guardians who can stop Earth from suffering irreparable damage. But we are not acting with enough determination to stop that damage. We sit and debate whether climate change is real while large segments of our planet burn,” said Delia.

He mentioned that Parliament declared a climate emergency on the initiative of the Opposition.

He said that Malta is a small island state and therefore susceptible to rising water-levels.

According to Delia, Europeans should safeguard their national security while not shying away from abiding by their humanitarian obligations.

“The human dignity of every migrant is an absolute value which cannot be bartered away.  Therefore, it is this conviction that urges us to strive harder in our efforts in order to achieve greater cooperation between neighbouring nations in this regard,” said Delia.

The Leader of the Opposition said that Malta’s foreign policy was to seek and maintain close cooperation with all countries.

Delia also described 2019 as a year of “significant challenges at the local, regional, and wider international levels.”

He said that the PN looks forward to closer collaboration with China.

Monique Agius   February 22, 2020
On 3 June 2004, 60-year-old Mary Zarb and a 24-year-old Nadya Vavilova were in Zarb's apartment in St Paul's Bay for a Maltese language lesson. The block was adjacent to a construction site when a worker cut through the bearing concrete surface of the building. The block collapsed, and the two were killed.

Monique Agius   February 22, 2020
The former Police Officers' Union president said that he was approached by various individuals who urged him to consider becoming the next commissioner.