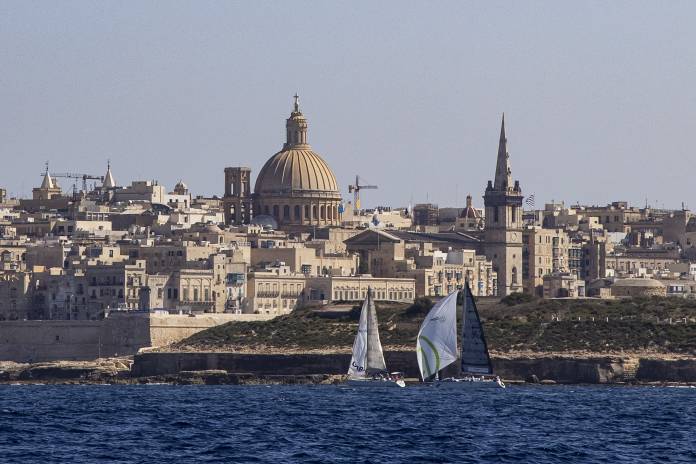 The first offshore event for the Royal Malta Yacht Club, after the resumption of racing, was a weekend regatta to Marina di Ragusa.

The event was put together soon after it became possible to sail to Sicily again and in spite of the short notice managed to attract a good-sized fleet.

Under the direction of Race Officer Peter Dimech and his team of Race Management volunteers the fleet set off on Friday morning. Although the fleet was split into three classes – IRC Class, Club Cruiser and Multihull Class, Race Officer Dimech decided on one start for all, with the fleet leaving Marsamxett at 8.30 am, with approximately five knots of wind.

Malta – Ragusa Leg
The forecast of very light wind was not very encouraging, but the breeze turned out to be better than expected and steady enough to allow the boats to make fairly good progress without ever stopping. The faster boats made it to their destination by early evening with Sean Borg’s Xpresso crossing the finish line at 6.46 pm.

He was followed some time later by Jonathan Camilleri Bowman’s Maltese Falcon. Comanche Raider III despite having a good start had some mechanical challenges which put paid to their racing efforts.

The rest of the fleet, however, could not make the time limit established by the sailing instructions. Godwin Zammit’s Inspiration finished just 12 seconds after the 10.30 am deadline while the remaining boats retired.

Better wind was expected for the return race to Malta on Sunday and a steady North Westerly breeze made for a fast crossing despite a short period in which the wind faltered.

Once the breeze picked up again, it was a swift reach under spinnaker all the way to the finish at Tigne Point giving the bathers in Tigne Beach something to watch on a Sunday afternoon.
Having undergone the necessary repairs in Ragusa, Comanche Raider III was the first boat home having had a close battle over the last mile to the line against Sean Borg’s Xpresso.

Comanche Raider pipped Xpresso to Line Honours with just a thirteen second advantage. In the end, however it was Time Out who prevailed over the lot on corrected time.

Mario Sant, after the race, commented on how having been cooped up, like every one else, for most of the winter, the crew of Time Out were eager to get going and this was clear from the start. Showing a clean pair of heels to the rest of the fleet, they eventually were overtaken by the larger and faster boats, namely Xpresso & Comanche. However, they did hold their own till the very end, knowing that every second counted.

Meanwhile, a close battle between Maltese Falcon and Inspiration for most of the course ended in a spectacular photo finish with Inspiration crossing just marginally ahead. Zammit’s decision to keep Inspiration further offshore in a straight line to the finish paid off as opposed to Maltese Falcon’s decision to gybe downwind thus taking a longer course. Zammit made his experience count and this also resulted in him being the sole finisher in the Club Cruiser Class.

“It was a great weekend and a good start to the resumption of the racing programme. Many thanks go to the Porto Touristico of Marina di Ragusa for their hospitality, the Circolo Velico Kaukana and the Capitaneria di Porto of Marina di Ragusa for their help in setting up the finish, as well as the RMYC Race committee and staff for the overall organisation” – Godwin Zammit, Commodore, Royal Malta Yacht Club.

The next event on the Club’s Racing Calendar is the 60th edition of the Malta Syracuse Race which is scheduled to take place on Saturday 1st August. The Race will start from Malta and a good number of Sicilian boats are expected to take part alongside the Maltese fleet. Together with the Lega Navale Italia, the Royal Malta Yacht Club is also organising a second race from Syracuse to Taormina which will take place on Monday 3rd August.

More information can be obtained on the club’s website.