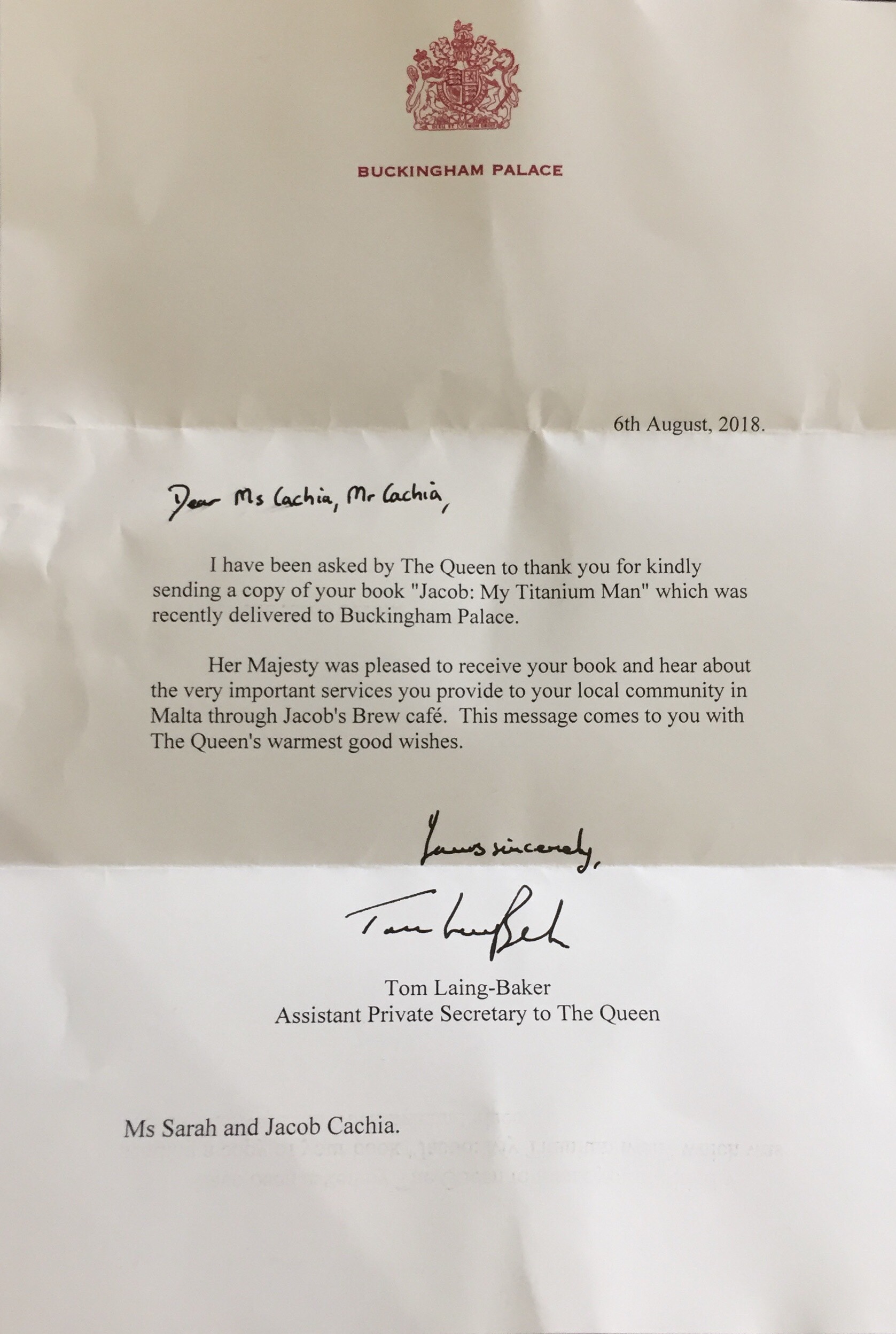 The song goes: “When the going gets tough, the tough get going.”  And Jacob Cachia has certainly had his share of tough times. On their website,  Jacob’s mum Sarah (herself a tough cookie and super-mama) recounts how the lives of her family changed in the blink of an eye:

“In late January 2013, my 15-year-old-son Jacob was diagnosed with sinusitis and was admitted to the ENT Department at Mater Dei Hospital. After five days of treatment with antibiotics, he suffered severe fits and was rushed for an emergency MRI where the Doctors found that the right-hand-side of Jacob’s brain had been infected and was covered in pus. The infection had entered his brain through his sinuses.”

This rare condition is known as Meningoencephalitis.

Within hours, surgeons were performing a Craniotomy whereby part of the skull bone was removed in order for them to scrape away the pus. During the operation, there were other complications and doctors gave Jacob a 50/50 chance of survival.

Over the next few weeks, Jacob underwent more three more brain surgical procedures. After months at Mater Dei, he moved on to rehab at Karen Grech Hospital where he underwent intense therapy. There he learned to walk again despite being told by doctors that the extensive brain damage would affect his mobility.

Jacob has years of therapy ahead of him but this hasn’t dampened his spirits. He eventually went back to school to repeat Form 5 and he did his O’ levels. He later enrolled in MCAST on a Business and Commerce course.

When he was discharged from hospital Jacob and his mum started a support group on Facebook. This led to Sarah writing a book called ‘My Titanium Man’ (surgeons had fitted a titanium plate to replace the missing skull bone) and, eventually, managed to make his ultimate dream come through with the opening of the coffee shop ‘Jacob’s Brew’ in Marsascala.

The coffee shop operates under the principle of ‘paying it forward’. When you pay your bill at the counter, they stamp the back of your receipt so that you may pass it on to a family that is facing hard times. They then may return to the shop with their stamped receipt where they will be offered a free pot of coffee or tea and help from a support group set up at the cafe.

A percentage of the profits also goes to worthy charitable causes, including the NGO Survivors Malta. The café also delivers free sandwiches and coffees to the families in the ITU waiting area at Mater Dei Hospital and the Reunited Pet Cabin, amongst other projects.

I had the great pleasure of meeting Jacob at a garden party held at the British High Commission in June. Together with Sarah, he was honoured by High Commissioner Stuart Gill during his speech to his guests.

The book ‘My Titanium Man’ was also sent to a rather important person – Queen Elizabeth II. Jacob and Sarah recently received an acknowledgement from Buckingham Palace stating that “Her Majesty was pleased to receive your book and hear about the very important services you provide to your local community in Malta through Jacob’s Brew café.”

Jacob told Newsbook.com.mt: “I’m happy that the High Commissioner Stuart Gill has kept his promise to me to pass on my book to the Queen. I was so happy when I got the letter. I had written in the book: ‘Be prepared to be inspired and please pass it on to others’. I hope that she does. Knowing that makes me happy. Maybe one day I will get to meet her with mum.”

If you do, Jacob, I’m sure she will be impressed.