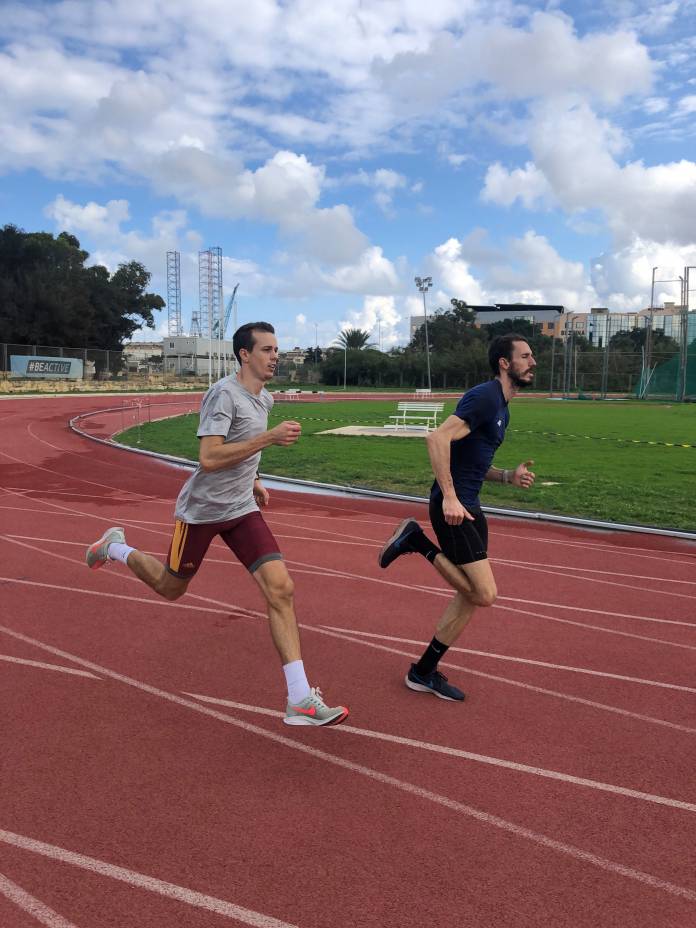 Two of Slovakia’s rising athletic stars, Martin Kučera and Šimon Bujna, together with their coach, Radoslav Ivan, are currently in Malta for a four-week training camp to finalise their preparations for the upcoming indoor season.

The national association, Athletics Malta, which has facilitated this camp, is striving hard to secure similar training camps in Malta, and has big ambitions for the upcoming years, with its committee hard at work to secure stronger investment in athletics’ facilities which would strengthen the possibility of attracting similar events to Malta. Two  such confirmed events are the hosting of an International Meeting of European Athletics Promotion circuit in May 2021 as well as a training camp of leading British shot putters as part of their preparations for next Summer’s Olympic Games.

The Slovak sprinters are prepping up for the upcoming indoor season, with the ultimate objective of securing a place in the March indoor European Championships due to be held in Toruń, in Poland.

Bujna has already after clocked an impressive 46”44 earlier this year, the eight best ever in Slovak history at the distance. Martin Kučera has already ran sub-48” on the 400m distance three times and is now focusing on achieving this timing indoors too.

Coach Radoslav Ivan expressed his delight at the welcome given in Malta: “The team at Athletics Malta has ensured that all our needs are met and for that I am truly appreciative of the support received.” He also highlighted Malta’s ideal climatic conditions for such camps and the impeccable state in which the Marsa Athletics Stadium is maintained, particularly its track, and the availability of an additional warming-up track nearby.

Athletics Malta President Andy Grech noted that it is a key objective of the present committee to continue to promote Malta as a destination of excellence for sports tourism, explaining that its warm climate makes it ideal for mid-season training camps.

Grech explained: “We believe that sports can be an important contributor of economic growth in the upcoming years, while diversifying Malta’s tourism product. We have already secured two major international events to be held on our shores but the opportunities out there are significant. However, we cannot do this on our steam alone: to further put Malta on the map and attract more similar activities, together with the economic benefit that the country derives, we need further support in terms of infrastructural investment, particularly in our facilities, so as to be able to truly promote the country as a centre of excellence in this sport.”