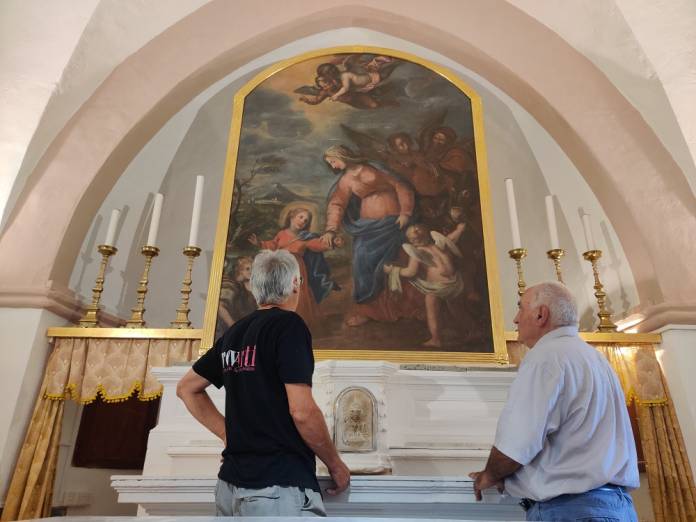 Another restoration and conservation project supported by Bank of Valletta was concluded over the past days.

The titular painting of the Comino Chapel is back in its place in full glory to be admired by present and future generations as part of Bank of Valletta’s corporate responsibility towards the Maltese community after a year-long process of extensive restoration at PrevArti’s workshop in Mosta.

The painting depicting The Return of the Holy Family from Egypt had to undergo a rigorous and meticulous process which required detailed attention due to the bad state of the canvas and the painting itself. Restorer Pierre Bugeja explained that the painting had darkened over the years whilst a major intervention in the past proved to be detrimental to the layers of paint mainly due to the use of hard metal. Some parts at the lower end of the painting had missing original paint which had to be re-touched from scratch.

Art Historian Dr Sandro Debono said that from research he has conducted, all roads are leading to Carlo Zimach as the artist who depicted this piece of art. Zimach who was a Priest from Żebbuġ (Malta), is known to have worked closely with the Parish of Nadur, where a number of paintings attributed to him are still found within this Basilica.

Debono said that Carlo Zimach was inspired by an etching of an important painting by Giovanni Battista Paggi at the Santa Maria degli Angeli Church in Genova, Italy.

The chaplain of the Comino Chapel, Mgr Joseph Attard, was delighted to welcome back the painting. He had identified its bad state and the immediate need for restoration as soon as he was appointed chaplain to Comino about two years ago.

PR & Marketing Executive at Bank of Valletta, Charles Azzopardi, expressed satisfaction on the completion of yet another BOV project. This project brought to light a part of our heritage which was relatively unknown by the public, on the tiny island of Comino.

Money management and student loans with ĠEMMA and BOV