A group of 27 people who were rescued by a tanker in Malta’s search-and-rescue area four days ago are still stuck on the cargo vessel as Malta is refusing to allow them to disembark.

NGO Alarm Phone, which has been monitoring their plight from the outset, had reported that the group had left Libya on 3 August, and ended up drifting in high waves and strong winds. The Maersk Etienne, a tanker flying the Danish flag, intervened to shield the boat in distress before confirming that it had rescued them on 5 August.

The Etienne subsequently headed towards Malta, but is yet to disembark. Alarm Phone, which has been keeping in contact with the vessel, said that Malta is denying it the right to land. 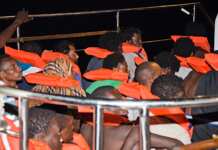 The tanker has thus anchored a few miles to the east of Malta, where it has been stuck for days, leading Alarm Phone to lament that Malta was failing its duty to assign the rescued people to a safe port.

Last week, after a significant number of asylum seekers who disembarked in Malta tested positive for Covid-19, the Maltese government issued an expression of interest for a vessel in which such migrants could be quarantined.

The plans appear to be a continuation of the controversial offshore detention of asylum seekers that Malta practiced for over a month, using private pleasure boats to do so. The practice was ended on 6 June – when 4 boats were being used for this purpose – after a protest was held on one of the vessels.

The asylum seekers who tested positive for Covid-19 are included in Maltese pandemic figures, though the health authorities had initially excluded them.

However, by denying them entry, Malta could potentially exclude them once more, as had happened at the start of the pandemic with the Diamond Princess cruise liner. Since the liner had not been allowed entry in any port when an outbreak of Covid-19 occurred, the cases reported have not been included in the Covid-19 figures of any nation.