A Swedish woman working in Malta who is bipolar and was taken to Mount Carmel Hospital for treatment told her family that she was locked up inside and that she was not allowed to leave.

The niece of the woman’s mother wrote an appeal on Facebook on behalf of the mother to help her cousin. The mother wrote how the child has been taking treatment for her condition, and is currently very unstable and therefore not allowed to fly back home. This post was also reported on in Corriere di Malta, an online news portal.

The mother said that she is coming to Malta and try and get her released from Mount Carmel. 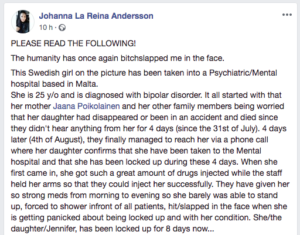 The woman’s family have confirmed that they are travelling to Malta.