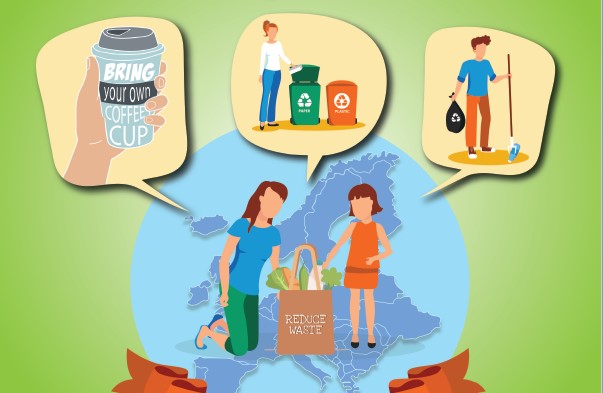 From clean-ups, to initiatives such as bringing your own cup or water bottle, to the elimination of balloons, to finding creative ways of reusing waste, this year saw a record-breaking number of actions during the European Week for Waste Reduction (EWWR).

The European Week for Waste Reduction is an EU-wide initiative that aims to promote the implementation of awareness-raising actions about sustainable resource and waste management during a single week. It encourages a wide range of audiences (public authorities, private companies, civil society as well as citizens themselves) to get involved. The theme for 2019 revolved around waste education and communication for behavioural change with the slogan: ‘Change your ways, reduce your waste’. It ran from 16 to 24 November.

Malta saw an impressive 186 actions from 96 different entities. Of these entities, 22 were  businesses, 37 schools, 6 individuals, 13  NGOs and 18  public administration offices.The  local Malta Waste Reduction Awards are due to be held in early 2020, to recognize the actions and award those outstanding ones.

It was encouraging to see how some of the projects were inspired to continue well past the EWWR. Speaking on behalf of the National Focal Point on Drugs, Carlo Olivari Demanuele said: “Our campaign will continue at different levels now and in the future.” Emmanuel Sammut, an independent participant, said: “It was indeed a very positive experience. Thank you for your encouragement and support at all times.”

Wasteserv, Malta’s waste management company and local EWWR coordinator, also organised its own actions. These took the form of a physical theatre piece as well as a dance performance. Entitled ‘Been there, dumped that’, and performed by Hoi Polloi, this show saw audiences break the fourth wall and immerse themselves in a physical theatre piece that explored our potential to make the change our world needs.

‘One man’s trash is another man’s treasure’ was a contemporary dance project by Żugraga Dance that strove to encourage a global effort to improve the physical and social environment. Theirs was an interactive music and dance performance that used recyclables in a fun and entertaining way. It was followed by a workshop that involved the creation of different sounds and rhythms with the recyclable objects through movement, as well as a discussion on waste and the importance of recycling and reusing.

Internationally the EWWR was also a hit and saw 16,570 actions being carried out in 30 countries. Finland, for instance organised an invisible waste project that challenged Finns to follow a zero waste lifestyle for a week. In Ireland presentations were held to educate those running cafés on how to do so in a waste efficient way as possible. And in Estonia, batteries and aluminium candle shells were collected in a kindergarten to help raise awareness among the children.

The EWWR is an ongoing initiative. You can keep updated by following Malta’s European Week for Waste Reduction Facebook page.

Watch: ‘Ta’ Qali dumping is the fault of who produced the waste’ – Herrera

82 tonnes of batteries collected in 2014

Reuters   January 18, 2020
Erdogan made his remarks in a column published on the Politico website on Saturday, ahead of a summit in Berlin on Sunday that will try to stabilise the country

Photos: Man takes giant tortoise out for walkies in Japan