As of today, rapid Covid-19 testing is to be available at a new hub in Floriana.

Minister for Health Chris Fearne stated this during a press conference, outlining that rapid testing is to be available in two new hubs; one in Floriana, and another in the North. The Northern rapid testing hub is to open as of next week.

These hubs will mean around a thousand daily rapid tests can be conducted, alongside the thousands of other tests being conducted in the 6 other regular testing hubs.

Until November 1st
Over 9,000 swab tests already booked until end of the month 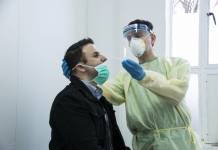 Fearne explained that rapid testing will also be available in nursing homes, at the Malta International Airport, in schools, and for front liners, amongst others. The rapid testing kits have been clinically approved to be efficient in the results provided.

During the same press conference, Fearne mentioned other measures concerning health that have been announced in the budget. These include osteoporosis medicines, psychiatric medicines and HIV medicines being provided for free.