A cri de Coeur by Archbishop Charles J Scicluna opened Newsbook.com.mt’s webinar on “How are we planning to live?”. Addressing the leaders of society in the environmental field, the Archbishop called for a true appreciation and authentication of the value of the land. Using Pope Francis’ Apostolic Exhortation Laudato Si, on this its fifth anniversary, Archbishop Scicluna focussed on three attitudes which, if adopted, could bring about considerable environmental change.

Archbishop Scicluna expressed concern that the quality of life is not being serviced through the construction of “matchboxes which are as small as chicken coops and not fit to breed rabbits in”. He said that land in Malta is scarce and should inspire us to value its worth in more than just money. He said that restraint in the use of land is called for particularly when planning its use. Land reclamation he said, will change the physiognomy of the land and he asked if it was worth changing the map of Malta for this. He said that in this land scarcity, we seem to have not had the time to consider the need for open spaces. To this effect, Archbishop Scicluna said that we need to be grateful for the land we have.

Speaking on sustainability, Archbishop Scicluna said that the primary concern here needs to be used. He said that the number of vacant dwellings are numerous, and rehabilitation should be a strong direction to pursue. This would mean that we would retain the inherent architectural tone of our towns and villages. He said that it is our responsibility to ensure that the nature of the built environment is maintained through a more restrained approach to development. He asked if it made sense that a farmhouse is transformed into an upmarket dwelling complete with pool. Is this sustainable, asked the Archbishop.

Archbishop Scicluna emphasised the need to safeguard the urban heritage which has survived through the generations. This heritage in both natural and built environment is our responsibility to safeguard, concluded the Archbishop. 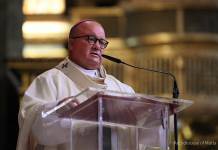