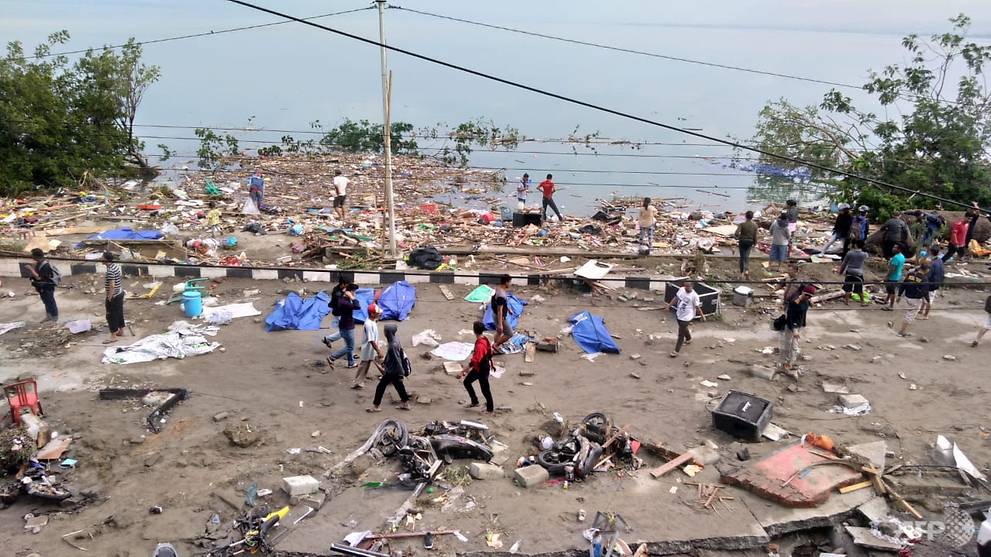 At least 30 people were killed when a major earthquake and tsunami hit the city of Palu on Indonesia’s Sulawesi island on Friday, a hospital official told Metro TV in a report broadcast on Saturday.

Strong aftershocks continued to rock the coastal city on Saturday morning after waves up to two metres (six feet) high swept through the scenic tourist town, triggered by a 7.5 magnitude earthquake on land.

Amateur footage shown by local TV stations, which could not immediately be authenticated by Reuters, showed waters crashing into houses along Palu’s shoreline, scattering shipping containers and flooding into a mosque in the city.

“Bodies of victims were found in several places, because they were hit by the rubble of collapsing buildings or swept away by the tsunami … but we are still collecting data,” Sutopo Purwo Nugroho, National Disaster Mitigation Agency spokesman said on Saturday.

The quake and tsunami caused a power outage that cut communications around Palu. On Saturday, authorities were still having difficulties coordinating rescue efforts.

The city’s airport remained closed after its runway and air traffic control tower was damaged in the quake but officials said they were preparing to reopen to allow aid to come in.

“We hope the airport can be reopened soon for flights carrying disaster relief and aid,” said Yohannes Sirait of AirNav, the air traffic management agency.

Metro TV played amateur footage that showed large pools of water remaining from the tsunami, a bridge that had been washed away, large cracks in roads and buildings badly damaged.

Tezar Kodongan, a resident of Palu who took one of the videos, told the TV station some of the city landmarks were badly damaged.

“There is no evacuation yet in the disaster area,” Kodongan added.

The U.S. Geological Survey put the magnitude of the second quake at a strong 7.5, after first saying it was 7.7.

The Palu area was hit by a less powerful quake earlier on Friday, which destroyed some houses, killed one person and injured at least 10 in the fishing town of Donggala, closest to the epicentre, authorities said.

Indonesia sits on the Pacific Ring of Fire and is regularly hit by earthquakes. In August, a series of major quakes killed over 500 people in the tourist island of Lombok and destroyed dozens of villages along its northern coast.

Monique Agius   March 26, 2020
Deputy Prime Minister and Health Minister Chris Fearne has also ordered the adjudicating board to refrain from awarding the tender.

Sylvana Debono   March 26, 2020
The National Audit Office (NAO) report on the spit of land in St George’s Bay known as the ITS site raised several issues of good governance.

Government should ensure that all those working in journalism will be financially assisted –...

Monique Agius   March 27, 2020
IĠM noted that various European governments were assisting the media sector through financial aid. The institute provided examples of how other governments were helping media houses and freelance journalists during this crisis.